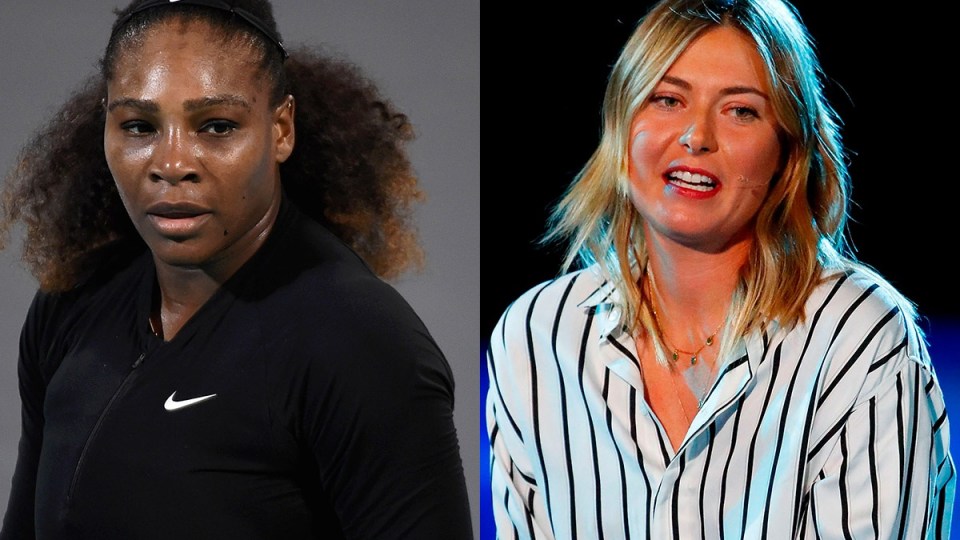 It seems as though time off the Grand Slam circuit hasn’t cooled Serena Williams’ fiery rivalry with Maria Sharapova, based on a cheeky tweet the US star posted ahead of Sharapova’s third round match against Angelique Kerber.

Williams, who pulled out of this year’s Open because of fitness concerns after the birth of daughter Alexis in September 2017, is clearly still monitoring the Melbourne tournament and barracking against her longtime nemesis.

On Friday, a Williams fan account dared to tweet that they “kinda want Sharapova to win tomorrow”.

Williams’ reaction on Saturday was less-than-enthusiastic, with the 36-year-old responding with a close-mouthed emoji generally considered, in social media speak, to be a sign of disapproval.

“It’s not a rivalry, they say,” US tennis writer Ben Rothenberg sarcastically tweeted, alongside a screenshot of Williams’ tweet.

The tweet may well have cursed Sharapova’s prospects at the Open – she was bundled out by Kerber in straight sets.

Sharapova and Williams’ feud has been ongoing for more than a decade and few know what truly started it – including the players themselves.

In her 2017 memoir, Sharapova attempted to nail down the starting point, writing: “I think Serena hated me for being the skinny kid who beat her, against all odds, at Wimbledon.”

Can you hit with that, Caro?

When second seed Caroline Wozniacki took to the court for her third round match against Dutch player Kiki Bertens, something was noticeably absent.

The recently-engaged Danish player was without her whopping engagement ring from her ex-NBA player fiance, David Lee.

The former New York Knick proposed to Wozniacki with an 8.8-carat diamond (eight is her favourite number) while on holiday in Bora Bora in November last year.

Unfortunately, the sheer size of the ring prevents Wozniacki from wearing it on the court, not to mention its very real potential for blinding her opponent.

It didn’t come as a huge surprise that – after he yelled “Why the f*** did I play doubles?” during his match against Jo-Wilfried Tsonga – Nick Kyrgios withdrew from the doubles competition on Saturday.

He reportedly did so on the orders of doubles partner and close friend Matt Reid.

The call came after Kyrgios on Friday bemoaned his decision to play doubles the day before his match against Tsonga, muttering: “Hours in 50 degree heat … really good management.”

Walking down a Country Road

Keen-eyed fashionistas might have noticed a slight change to this year’s Open – the outfits of the chair and line umpires on court.

One of the victims of Simona Halep’s seemingly endless three-hour and 45-minute match against the USA’s Lauren Davis was Davis’s toenail, with the American seeking a medical timeout after she lost the nail mid-match.

Viewers at home were equal parts impressed and disgusted.

Romania’s Halep went on to claim the match in three sets, winning the last set 15 games to 13.

Have to feel for that physio going near a tennis players feet at 12-13 in a final set is not a place I’d like to be #AusOpen pic.twitter.com/iTomJVy6hx

Spain’s Rafael Nadal gave a nod to Roger Federer’s star treatment at the Australian Open, cheekily hinting that the Swiss player had the upper hand because he had only been playing at night.

Federer has had three consecutive night matches during a week in which temperatures during the day regularly soared over 40 degrees.

Speaking to Fox Sports, Nadal suggested that players with more media pull got to play at night, meaning they could avoid battling the heat.

“There is television, there is tickets to sell, there is players that achieve more than others,” Nadal said.

Retired star Andy Roddick defended Federer on Twitter, pointing out Grand Slams were “a business” in need of eyeballs for ads and sponsors.

Let’s not pretend like this isn’t a business. The longer Roger is in an event, the more eyeballs are on screens, the more ad/sponsor money in etc ……. so yes, they will listen to what the stars have to say. It’s sensical https://t.co/3Nn4eeMjd5