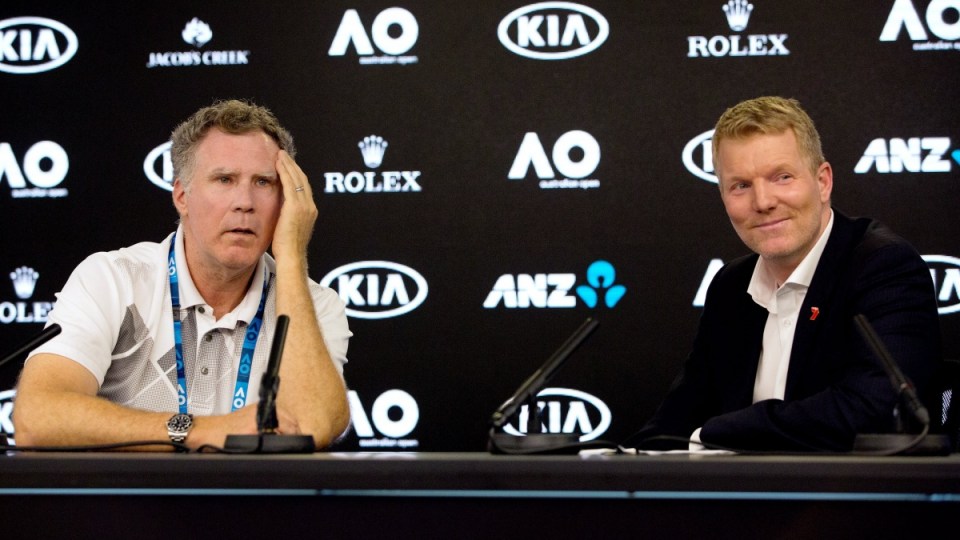 Will Ferrell has been the subject of numerous headlines at the Australian Open this week.

The Anchorman star famously interviewed Roger Federer after his first-round win on Tuesday evening and he has been a regular presence at Melbourne Park through the tournament.

The 50-year-old, who is due to return home on Friday, made one last public appearance on Thursday, taking part in a hilarious press conference and producing some typically amusing commentary on his visit Down Under.

That was after he praised Melburnians for being “some of the most friendly people you’ll come across” and revealed the one thing he’d like to change in Australia.

“I think driving on the wrong side of the road needs to be switched,” he said.

“It’s very hard to drive over here, for me.

“So if that could be … that’s probably an easy thing to fix, right?”

Ferrell then revealed that he had not been noticed much by Australians during his stay.

“No one is recognising me,” he said.

“I’m really upset by that! So I’ve been walking through the streets dressed as many of the characters I’ve played and people still aren’t recognising me!

“So that’s been a little disappointing.”

Ferrell added that his trip to Australia “may inspire me to make an Australian tennis movie”.

We’ll see about that.

Tennis Australia has confirmed it will be speaking with the brother of Nick Kyrgios, Christos, about the Sportsbet-branded t-shirts he has been wearing to matches at this year’s Australian Open.

The Australian Open has an official bookmaker, William Hill, and the regular television shots of Christos Kyrgios have given Sportsbet free advertising, sometimes in time slots when, under new laws, betting ads cannot be aired.

“Is it ideal to wear that form of overt marketing like that? No.

“We will be organising to have a conversation about this moving forward.”

That’s one way to get the media on side …

At every Australian Open, Angelique Kerber celebrates her birthday and on Thursday, she turned 30.

Kerber, who plays Maria Sharapova in round three, kindly donated her birthday cake to the press, though, sparking a stampede to the media kitchen from the hundreds of journalists at the Open.

We can confirm the cake barely lasted five minutes.

Aussie joy in the doubles

Sam Groth and Lleyton Hewitt started their men’s doubles campaign with a straight-sets win that suggested they can go pretty deep in the event.

Also in the men’s doubles, Nick Kyrgios and Matt Reid won, although they needed three sets.

That meant Kyrgios played for nearly two hours in the scorching sun – something that may impact him against Jo-Wilfried Tsonga on Friday evening.

“I love being in the city. I love Australia. I love the summertime.

“I was watching this tournament with a box of Kleenex next to me sick.

“So, you know, I feel like I transported myself into the TV this year and I’m finding myself on Rod Laver Arena competing.

Maria Sharapova opens up on the pain of missing the 2017 Australian Open due to a drugs ban.

Kyrgios’ meeting with Tsonga is the highlight of Friday’s play, with Rod Laver Arena to host the clash in the night session.

Playing at night is a win for Kyrgios, with temperatures forecast to hit 42 degrees during the day.

Rafael Nadal will also avoid the worst of the heat, taking on Damir Dzhumhur in the evening on Margaret Court Arena.

There’s also a heap of doubles action on to entertain fans, with Samantha Stosur and Sam Groth to begin their mixed doubles campaign on Show Court 3, while Ash Barty will link up with great mate Casey Dellacqua out on Court 8 in the women’s doubles.

The Daily Deuce: Will Ferrell reveals the one thing he’d change about Australia