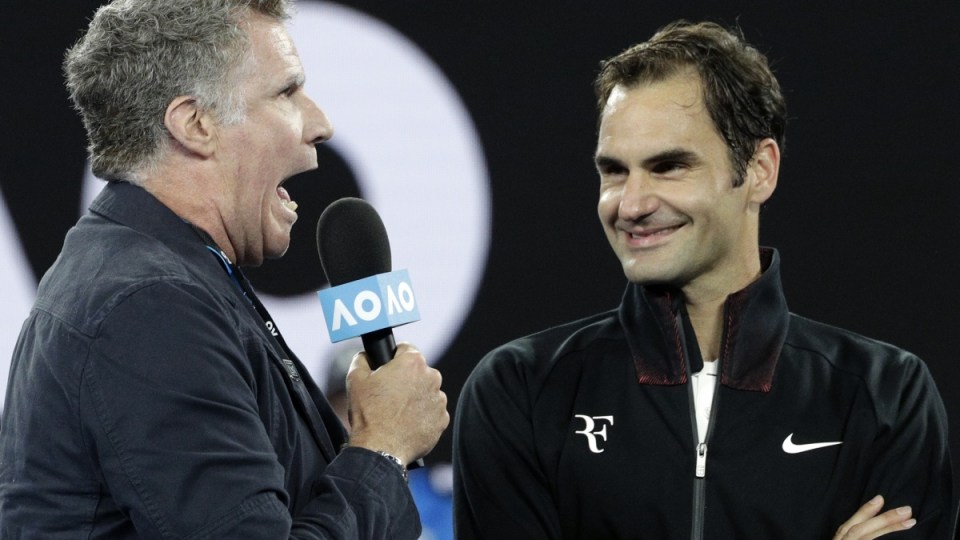 Actor Will Ferrell says his 2018 Australian Open experience may have inspired him to tackle a tennis film. Photo: AAP

Comedian Will Ferrell’s trip Down Under to the Australian Open may have ignited a festering ambition to star in a tennis movie.

While there’s nothing concrete on the way, the American comedy star – who showed interest in portraying Battle of the Sexes antagonist Bobby Riggs – voiced his desire to tackle a tennis-related film after spending four days in the stands at Melbourne Park.

“There is nothing in the works right now, but my visit to the Open here may inspire me to make an Australian tennis movie,” Ferrell coyly remarked in a press conference on Thursday.

At age 50, Ferrell admitted the ship may have sailed on the chance to play a historical figure – unless it was a comeback story.

“I would probably have to play a coach,” Ferrell, a self-taught tennis player, joked.

“I’m probably past my prime to play a player.

“Unless I’m, you know, a 50-year-old guy trying to make the circuit again.”

Earlier in the week the US star provided a memorable post-match interview, questioning Swiss maestro Roger Federer in his famous Anchorman persona of newsreader Ron Burgundy.

Fresh off a straight-sets win against Slovenian Aljaz Bedene, the 36-year-old Federer was asked by Ferrell if he felt like a young gazelle on court.

“Maybe. Maybe not. Don’t they get eaten in the end?” Federer replied.

The ageing tennis legend held his own despite clearly being caught off-guard by the man behind the microphone.

"Roger, would you describe your game as a silky gazelle?"

“I just took it upon myself to run on to the court of a grand slam, despite security,” Ferrell said in jest.

“Did you notice Roger’s body language? He’s a little bit afraid of me.

“He leaned back, like, what is this guy going to do?”

Ferrell, who is due to fly out of the country on Friday, said he’d enjoyed his four-day Australian Open holiday, watching the live action and travelling out to the Yarra Valley between sessions.

But with another hot day forecast on Friday, his exit might be coming at the right time as he revealed his “secret” tip to stay cool.

“Everyone says hydrate. I don’t. I don’t drink any fluids except for I drink a lot of clam chowder,” he joked.