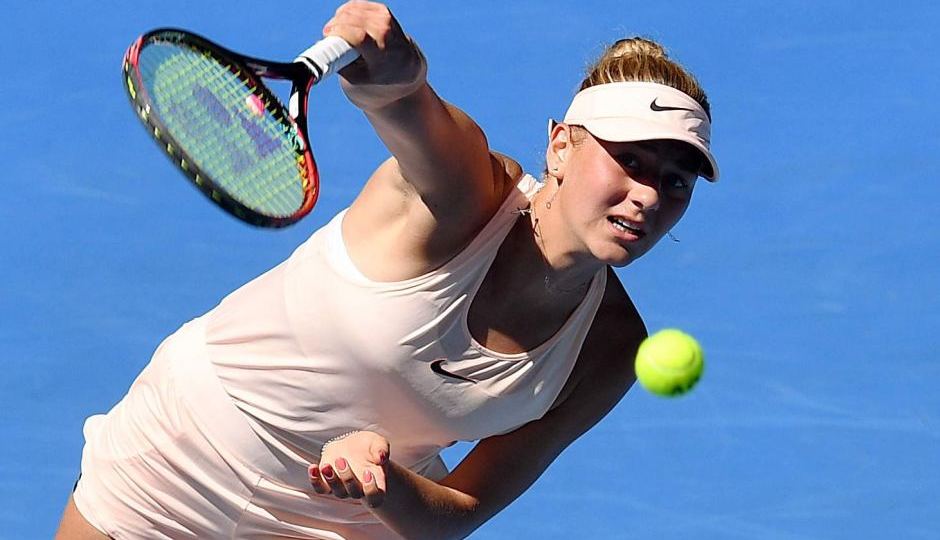 Marta Kostyuk's incredible run at the Australian Open will stretch into the third round after downing Australia's Olivia Rogowska. Photo: AAP

Australia may have seen another of its competitors culled from the Australian Open singles draw, but as consolation, we may have witnessed the birth of a brand new star in women’s tennis.

The teenage qualifier ousted Australian wildcard Olivia Rogowska 6-3 7-5 to become the youngest player since Martina Hingis 21 years ago to make the last 32 at Melbourne Park.

“I’m happy, just happy – I made it through,” said Kostyuk. “I beat some records or repeat them every year, so I feel okay.”

With a modest $US6733 career earnings to date (prior to the Australian Open, according to the WTA), Kostyuk had already turned heads by becoming the youngest player to win a match at the Australian Open in 22 years when she beat China’s 25th-seed Peng Shuai in the first round, also in straight sets.

At her age, Kostyuk is set to break a number of records, and by qualifying for the tournament proper, she became the first player born in 2002 to play in a grand slam main draw.

Double faults proved a worry for the Ukrainian, with 11 errors on serve to Rogowska’s three, but six aces and 22 winners more than made up for the one blemish in her game.

There was one comical moment for Kostyuk when, serving for the match, she belted her service straight into the stands behind Rogowska’s baseline.

But she held her nerve to win through to the third round on the following point, dropping her racket and holding her head as the crowd put partisanship to one side to applaud a sparkling prospect in women’s tennis.

Rogowska’s loss means Ashleigh Barty and Daria Gavrilova are the only remaining locals left in the women’s singles draw.

It was Rogowska’s third chance to reach the third round on home soil for the first time in her career, after second-round knock-outs in 2012 and 2014.

Kostyuk’s win will see her face off against compatriot fourth-seed Elina Svitolina, who overcame a sticky start to motor past Czech Republic’s Katerina Siniakova in three sets.

Svitolina looms as one of the tournament favourites and after losing the first set, she hit the afterburners to cruise past Siniakova 4-6, 6-2, 6-1.

Czech qualifier Denisa Allertova proved the stronger in her tussle with China’s Zhang Shuai in a 6-4, 6-5 (7-5) victory.

Australian Open 2018: Record-breaking teenager Marta Kostyuk through to third round