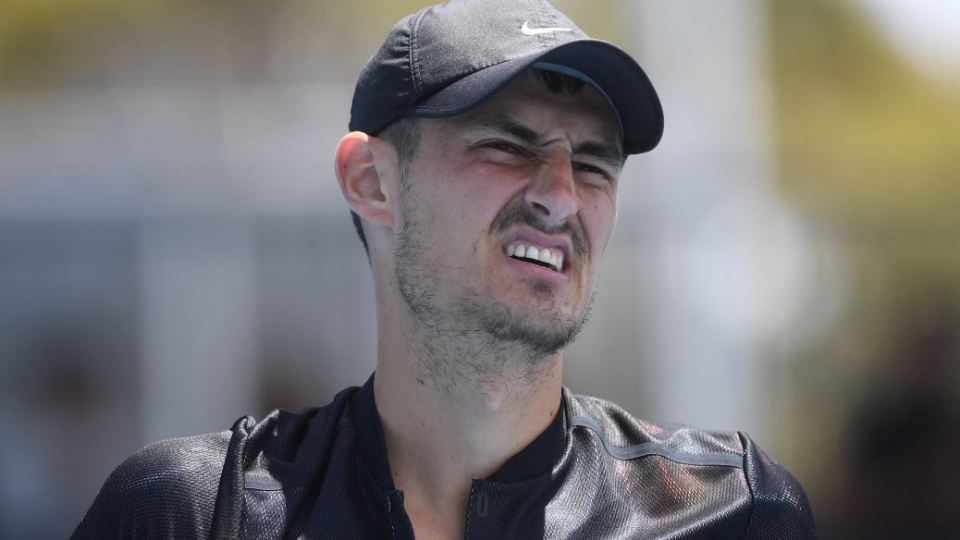 A surly Bernard Tomic had little to say after his shock defeat, but words weren't needed - that ugly grimace says it all. AAP/Julian Smith

Every local has come up short in Australian Open qualifying, completing an unfortunate whitewash at Melbourne Park.

John-Patrick Smith and Bradley Mousley failed to win through on Sunday morning, with Bernard Tomic and Priscilla Hon following suit after lunch.

Each of the four Australians in action on Sunday lost their third-round ties, leaving 17 locals to contest the men’s and women’s singles draws.

He had the chance to serve out the second set at 6-5 but lost the game and a subsequent tiebreak in his effort to reach a second main draw.

But the most surprising exit – and the weirdest – was Bernard Tomic’s departure, which he concluded with a snarling display at his post-match press conference.

Tomic will miss his first Grand Slam tournament in seven years and his ranking will dip even lower than 142, where he currently sits.

Asked whether this loss represented a career crossroads, Tomic responded caustically to journalists.

“I just count money, that’s all I do. I count my millions,” he said.

Tennis Australia had chosen not to hand Tomic an automatic wildcard spot for the Open.

The former world number 25 said before attempting qualification, which involves three knock-out matches, that he had never relied on Tennis Australia,.

“I’m not going to say anything [about not getting a wildcard],” he said.

After reaching the third round of the Open last year, Tomic won just eight more matches in a dismal season.

He was fined a Wimbledon-record $20,000 after admitting to feigning injury and being “a little bored” during a listless first-round loss to Mischa Zverev at The All England Club.

This will be the first time Tomic has not appeared at the Australian Open since 2008.