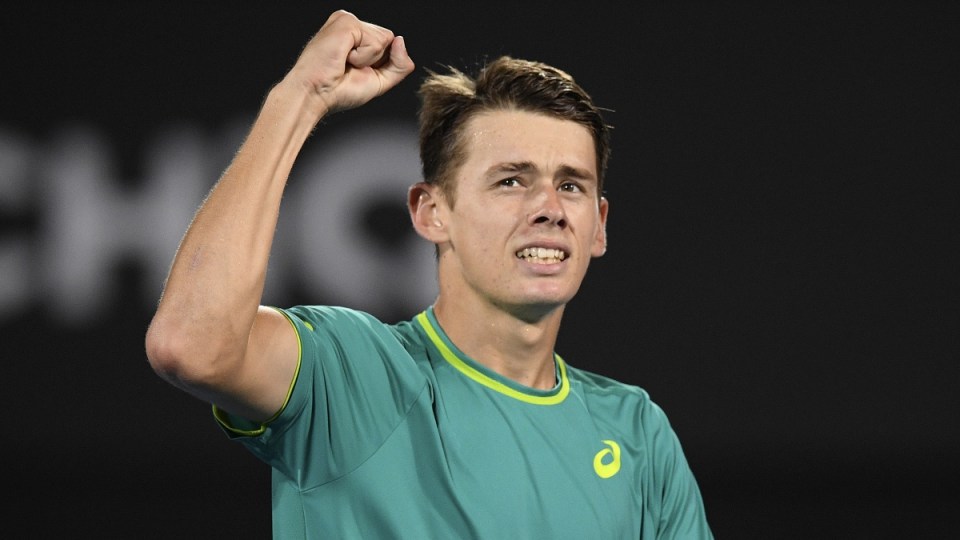 He might be one of the smallest men in the draw, but Australian teen sensation Alex de Minaur has promised to go big at next week’s grand slam in Melbourne.

De Minaur has become a star of the Australian summer after reaching the semi-finals of the Sydney International to back up his final-four showing in Brisbane.

Now the 18-year-old will look to advance to his maiden ATP tour final when he meets the 42nd-ranked Frenchman Benoit Paire in what is expected to be a packed Ken Rosewall Arena on Friday night.

Despite being on the end of a barrage of 200km/h serves all night, de Minaur, who entered centre court to the tune of New Sensation, stayed firm.

After starting the season ranked 208 in the world, de Minaur is expected to rocket up the rankings ahead of next week’s major at Melbourne Park.

His list of victims, which includes established players Milos Raonic, Fernando Verdasco and Damir Dzumhur, is growing with every tournament.

De Minaur isn’t the only Australian making waves ahead of next week’s grand slam – Ashleigh Barty has booked a Sydney International semi-final showdown with compatriot Daria Gavrilova after a convincing win in the last eight.

The 19th-ranked Barty showed why she entered the summer as Australia’s number one player after dominating an error-prone Barbora Strycova 6-3, 6-2 on Ken Rosewall Arena.

Barty broke the Czech midway through the first set and did not look back, unleashing an impressive array of shots past a frustrated Strycova to run away with the match.

Her victory came on the same day she was confirmed the 18th seed for the Australian Open, while Gavrilova was named the 23rd seed.

Australia’s no.1 Barty faces Belarusian Aryna Sabalenka, while Gavrilova opens against a qualifier in her bid to reach the second week for a third straight year.

His first big test is likely to come against French 15th seed and former finalist Jo-Wilfried Tsonga in the third round.