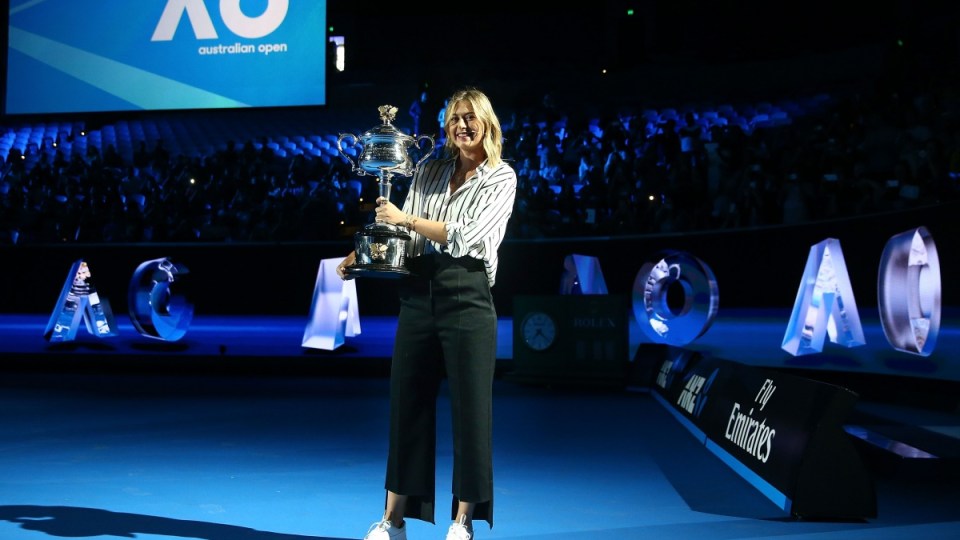 Maria Sharapova is ranked 61st in the world. Photo: Getty

Organisers of the Australian Open have been forced to defend the controversial decision to include Maria Sharapova in the tournament’s official duties, which has been labelled a “farce” by international media.

The Melbourne event, the first grand slam of the year, is routinely praised for its professional and smooth operation.

But that was not the case after Open officials chose to have Maria Sharapova help with the women’s draw for the 2018 event.

Sharapova is a highly controversial figure in tennis circles after serving a 15-month ban for testing positive to the banned substance meldonium during 2016 and 2017.

The Russian’s positive test was taken at the 2016 Australian Open and although Sharapova remains one of the biggest figures in the sport, the decision to have her involved in official duties raised eyebrows across the world.

A range of international media outlets hammered the decision, with The Times describing the event as a “farce”, while The Telegraph was equally as angered.

As part of her duties, Sharapova walked across Margaret Court Arena holding the Daphne Akhurst Memorial Cup – given to the winner of the women’s singles – before posing with the trophy she won in 2008.

“I think Maria Sharapova often got a raw deal in her anti-doping hearings…but I still cannot believe #AusOpen had her carry the trophy onto court,” New York Times tennis writer Ben Rothenberg tweeted.

Australian Open tournament director Craig Tiley was forced to defend Sharapova’s appearance and said that a range of other events – and player commitments – left him with no choice.

“We wanted to have a former champion,” he said.

“The challenge we always have this week is there is the Sydney event, the Hobart event, and there are also other events [where players are playing].

“As part of the tradition, we have the former champions.

“In fairness to Maria, the adjudication has occurred on that [drugs ban].

“She’s a former champion at the Australian Open, 10 years ago.”

🇷🇺 @MariaSharapova talks about how time away from tennis allowed her to enjoy a "normal life".

Viewers and media alike also took issue with an interview with the former world No.1 conducted by Channel Seven presenter Hamish McLachlan, with many complaining McLachlan skirted around the issue of Sharapova’s ban.

Writing in The Times, Stuart Fraser said: “The ceremony descended further into farce when the Channel 7 interviewer Hamish McLachlan did not mention Sharapova’s drugs ban once during a lengthy on-court interview.

“Her ‘time out’ from the sport was referred to as though it was a break of her choosing.

“It is another shameful episode in which tennis has rolled out the red carpet for a doping offender.

“To hell, apparently, with a message of deterrence for any player tempted to indulge in banned substances.”

In The Telegraph, journalist Simon Briggs wrote: “Sharapova – whose last act at Melbourne Park was to provide a tainted urine sample in January 2016 – received a big build-up as she walked onto Margaret Court Arena with the trophy.

“An obsequious interview with Hamish McLachlan ensued, in which McLachlan referred to her ‘time out’ as if she had taken a holiday rather than serving a 15-month doping ban.”

Sharapova will play world No.47 Tatjana Maria of Germany in round one at Melbourne Park.