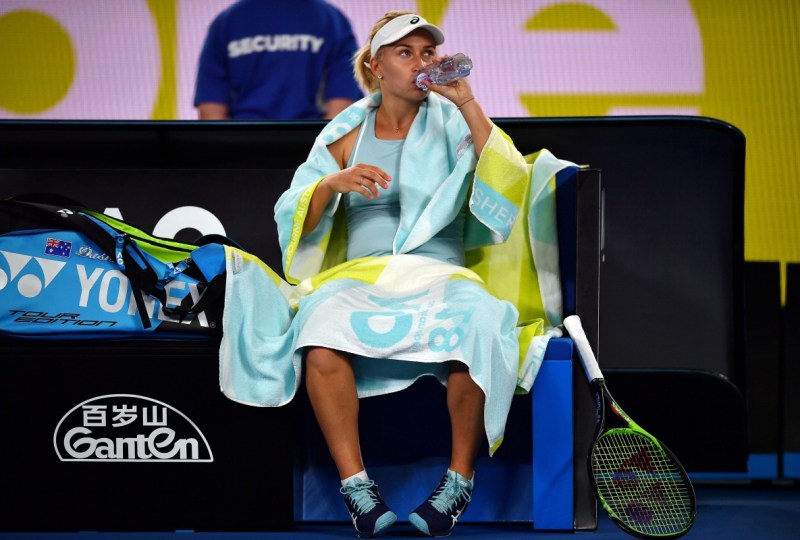 Daria Gavrilova has survived a thunderstorm and some lightning shot-making from fearless compatriot Olivia Rogowska to set up second-round showstopper with Samantha Stosur at the Sydney International.

The wet weather left Gavrilova hanging one game away from victory before she resumed two-and-a-half hours later to complete a 6-4 1-6 7-5 win at Olympic Park on Tuesday night.

Rogowska was serving at 4-5 down in the deciding set when play resumed.

The wildcard saved one match point on Ken Rosewall Arena before eventually succumbing to the world No.25 after two hours and 12 minutes of on-court action.

Gavrilova next faces a friendly grudge match on Wednesday night against Stosur, who much earlier on Tuesday progressed to the last 16 with a plucky 4-6 7-5 6-3 win over German Carina Witthoeft.

As well as a quarter-final spot at stake, Gavrilova and Stosur will both get a shot at revenge after jostling last year for the Australian No.1 ranking.

In their last encounter, on clay, Stosur denied Gavrilova in a keenly contested three-set final at the Strasbourg International last May.

Despite the defeat, Gavrilova a fortnight later ended Stosur’s record 442-week unbroken reign as Australia’s queen of the court.

The Fed Cup teammates are locked at 1-1 in head-to-head meetings, with Gavrilova beating Stosur in their first clash at the 2015 Canadian Masters.

“It’s always tough to play a teammate and a friend but I’ll just rest now a little bit, have a good sleep,” Gavrilova said.

“We know each other pretty well and it’s all going to come down to who competes better.”

Gavrilova said she was relieved to get past Rogowska, who was last week rewarded for winning the domestic Pro Tour series with a wildcard into the Australian Open starting on Monday.

“She’s been struggling a little bit, but she’s playing some good tennis and she played really well in the second set and I got a bit nervous and I started to over-think things a little bit too much.

“But thankfully I came out fighting in the third set.”

Daria Gavrilova and Samantha Stosur to clash in Sydney