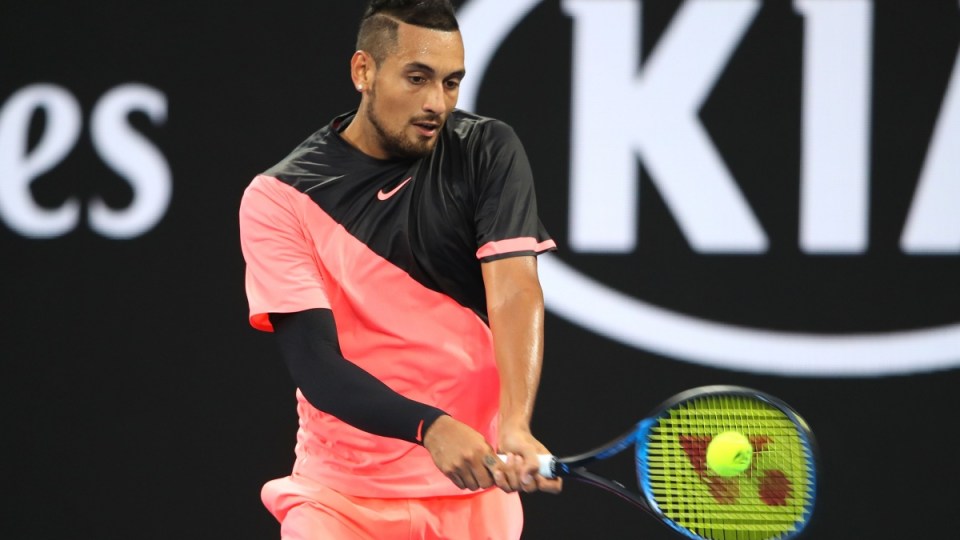 Nick Kyrgios was on his best behaviour during his successful Brisbane International run. Photo: Getty

Australian No.1 Nick Kyrgios has hosed down expectations his Brisbane International success will tame his temper.

Kyrgios did not record any code violations on his way to lifting the Roy Emerson Trophy, his first ATP World Tour title on Australian soil.

The victory elevated him from 21 to 17 on the world rankings, but Kyrgios will not commit to maintaining his more measured demeanour in the Australian Open.

“If I wanted to get a code (in Brisbane) I would have got one. I am always going to play with emotion, I have been like that since I was a little kid,” Kyrgios said.

“This week I didn’t have too much expectation on myself and I thought I was playing really well and there was no real reason to get mad.”

Kyrgios’ notoriously colourful nature has attracted fans alongside critics, with British rock star Liam Gallagher, former frontman of Oasis, tweeting to Kyrgios not to “listen to the beige boy” critics.

But pressure is building on Kyrgios to deliver on his talent at Melbourne Park where he is considered a genuine contender in a men’s draw depleted with withdrawals and several players – including Rafael Nadal and Novak Djokovic – under injury clouds.

Kyrgios bowed out of the Australian Open in the second round last year after squandering a two-set lead over Italian Andreas Seppi, an experience he said “left a bad taste in his mouth”.

The 22-year-old is now targeting a top-five ranking, buoyed by his Brisbane International success.

“I don’t necessarily think you need to play too many tournaments,” he said.

“I am never going to be a guy that is going to go out there any play 25 tournaments.

“For me it is important to pick the right tournaments and be invested in the ones I pick and, if I do the right scheduling, I think it is more than possible to finish in the top 10 – top five if I am playing like this.

“It definitely helps when you are winning big matches, especially in front of the home crowd as well, this week I wanted to do well and play well in front of the crowd.”