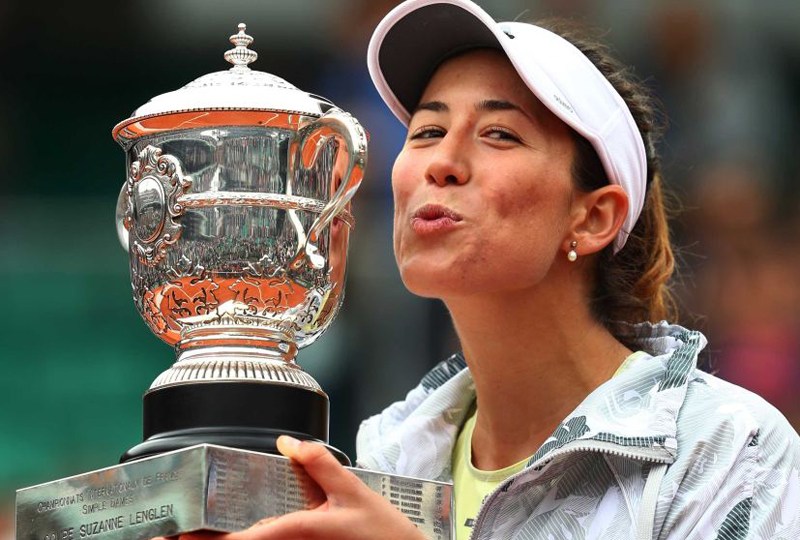 Garbine Muguruza has declared herself fit for the Sydney International after retiring with cramps at the Brisbane International. Photo: Getty

Reigning Wimbledon champion Muguruza climbed the tennis pinnacle when she reached top spot last September, which she followed with a fourth round showing at the US Open.

However she only lasted a month before being overtaken by current world No.1 Simona Halep – one of five players to have earned top billing last year, including Serena Williams.

Angelique Kerber and Karolina Pliskova also had a turn wearing a crown that changed hands seven times in 2017 – the most in 15 years.

Not since Lindsay Davenport, Jennifer Capriati, Venus Williams and Serena all vied for top spot in 2002 has the pinnacle of women’s tennis been as evenly contended entering a new season.

And Muguruza expects more of the same this year, beginning with the Australian Open, where only Serena has ruled herself out of contention.

“I think it’s going to be the whole year like this, because I don’t feel there’s somebody that different from the rest of the players,” Muguruza said on Sunday.

“This is going to be a very interesting year. A lot of changing, I feel.”

Muguruza declared herself back to full fitness to participate in this week’s Sydney International after being forced to retire in Brisbane last week.

The world No.2 led Aleksandra Krunic 7-5 6-7 (3-2) 2-1 before pulling out, however said she didn’t consider withdrawing from the warm-up event at Homebush.

She will enjoy a first-round bye before meeting qualifier Kristie Ahn or Kiki Bertens.

“I felt disappointed because you come from training and feel prepared and all of a sudden your body feels very bad. It took me a couple of days to recover,” she said of her Brisbane meet.

“But I’m happy that Sydney gave me the chance to play another tournament and I can take away this bad feeling that I had there.

“I don’t want to take it that dramatically because I’ve never had cramps. It was something that happened very rare in my career. I don’t think it’s going to happen that often.”