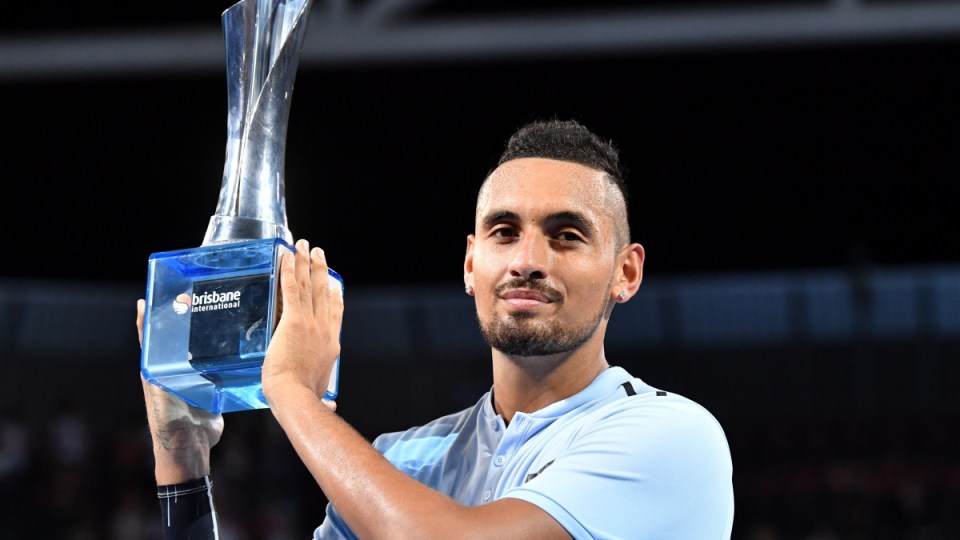 Nick Kyrgios is seen with the trophy after winning the men's Final against Ryan Harrison at the Brisbane International Tennis Tournament.

Nick Kyrgios has produced his best ever preparation for the Australian Open by winning his first home title with a comprehensive victory over American Ryan Harrison at the Brisbane International.

He is set to jump from 21 to 17 on the world rankings, one week out from the opening major of the season at Melbourne Park.

Kyrgios staved off five break points in the first set, including three in his third service game as the American made a terrific fist of dealing with the booming delivery of his opponent.

But the Australian third seed held his nerve and pounced at his first opportunity, a pair of forehand passing shots earning the decisive break before an ace sealed the first set in 37 minutes.

“I love playing in front of you guys. Even though sometimes it may not seem that way. But I do,” Kyrgios told to the Brisbane crowd after the win.

Twice Kyrgios thrilled the crowd with delightful touch at the net, while he used angles from the baseline and the occasional flat forehand to throw the 47th-ranked Harrison off his game.

A free-moving Kyrgios then cranked the pressure to another level in the second set, getting more balls in play on Harrison’s serve as he eyed an early kill.

A Harrison double fault to concede serve was telling of that intensity and a double break was more than enough security for a man who had only dropped serve three times all tournament.

“It’s a pretty good feeling. I didn’t know what kind of performance I would put on. But as the week went on, I felt like I was serving a lot better, hitting the ball better,” Kyrgios said after the win.

“I knew today [Sunday] was a great opportunity. He’d been playing well all week but I went out there as favourite. I felt a bit of pressure so it feels good to play well in front of that crowd.

“Even if I’d lost first round here, I’d probably still feel good going into next week. But just playing a lot of matches and coming through, that’s confidence for any player. Now it’s about recovery.”

The crowd packed inside Pat Rafter Arena are on their feet in appreciation for @NickKyrgios. It’s his FOURTH @ATPWorldTour crown and a first on home soil 🇦🇺 pic.twitter.com/9jmMYnz9TL

In lifting the Roy Emerson Trophy, Kyrgios becomes the second Australian champion in the tournament’s 10-year history after Lleyton Hewitt in 2014.

The triumph, the fourth of his young career, lifts Kyrgios four spots to No.17 in the world ahead of this month’s Australian Open.

Brisbane’s field was weakened by the withdrawal of Andy Murray and Rafael Nadal, but Kyrgios still had to find a way by world No.3 Grigor Dimitrov to make the final.

His form in that match, plus his comprehensive disposal of Harrison in the decider will mean that he will arrive in Melbourne as a legitimate contender if his body holds up.

While claiming pre-tournament that he would not have a full-time coach on tour in 2018, Kyrgios credited his good friend Matt Reid for helping him to a title in front of his family and friends.

“He does more than that (coach), he’s pretty much my team,” Kyrgios said.

“He doesn’t get the credit he deserves.”