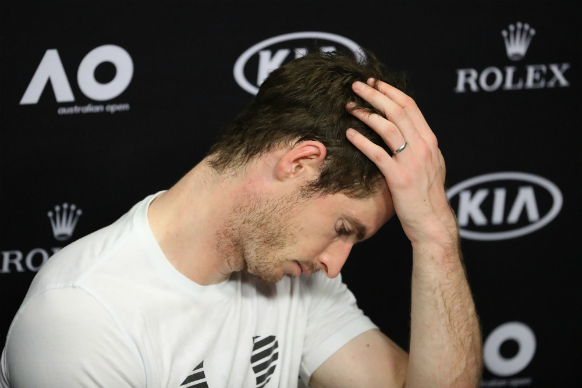 Andy Murray has withdrawn from the Australian Open due to an ongoing hip problem that is threatening his storied career.

The former world No.1 and three-time grand slam winner is flying back to the United Kingdom to “assess all the options” on the injury after floating the possibility of surgery earlier this week.

Murray, a five-time finalist at the Open, had planned to play at the Brisbane International this week but he withdrew from the tournament after failing to train.

He remained hopeful of competing in the grand slam but conceded defeat on Thursday afternoon, and could face several more months on the sidelines if he reluctantly opts to go under the knife.

“Sadly I won’t be playing in Melbourne this year, as I am not yet ready to compete,” Murray said in a statement released by Tennis Australia.

I’ll be flying home shortly to assess all the options but I appreciate all the messages of support and I hope to be back playing soon.”

The 30-year-old has not played since Wimbledon last July.

Ranked No.16 in the world, Murray is set to drop outside the top 20 and it seems unlikely he will ever return to the lofty heights he once hit.

“We are fully aware that Andy has been going through a difficult period with his hip and that he’s done everything possible to prepare for the Australian summer,” Australian Open tournament director Craig Tiley said.

“Personally, I also know that Andy loves tennis and would do anything to play. This is a very hard decision for Andy and we totally respect it.

“We wish him the absolute best on his road to recovery and look forward to having him back in Melbourne.

“He is a true champion and one of our favourites.”