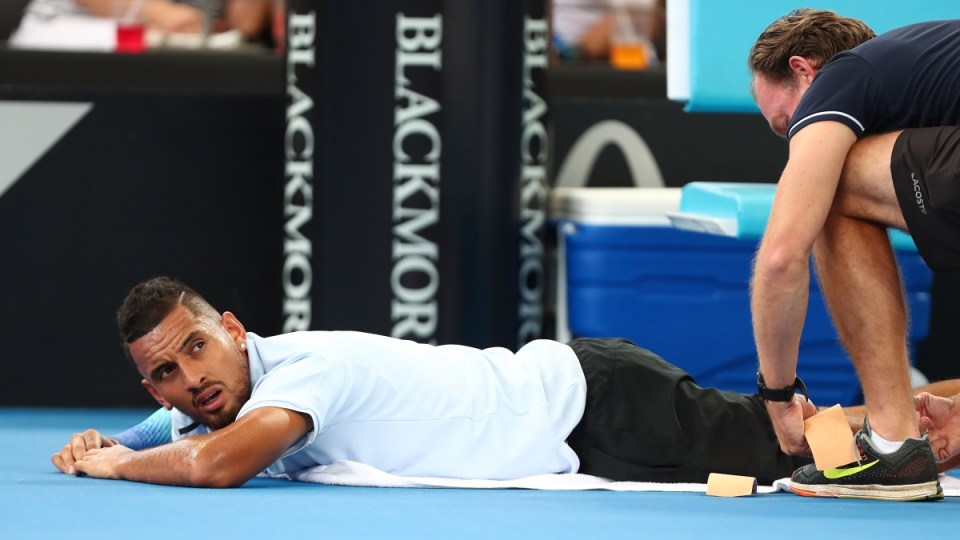 His body language may have screamed otherwise but Nick Kyrgios has played down a knee injury scare after literally limping into the Brisbane International quarter finals on Wednesday.

Third seed Kyrgios cut a frustrated figure after having his left knee strapped early and at times could barely move around the court but still pulled off a three set second-round win over countryman Matthew Ebden at Pat Rafter Arena.

World No.21 Kyrgios revealed he had suffered a knee twinge during hitting practice with two-time grand slam winner Lleyton Hewitt two days ago but at no stage felt like retiring in the hard-fought 6-7 (7-3) 7-6 (7-5) 6-2 win.

The 22-year-old also dismissed a suggestion he would be battling to be fit for the Australian Open, starting on January 15.

“I had been feeling pretty good coming into the tournament … then a couple of days out I was playing some points with Lleyton and kind of felt my knee a bit,” Kyrgios said.

I have been kind of nursing it the last day or two but I didn’t really know what it was.

“It had a bit of fluid in there leading up to the singles but it doesn’t really hurt me when I move, only when I am straightening my leg. I am sure I will be fine.”

The dual grand slam quarterfinalist also revealed he was still receiving treatment on a troublesome hip injury that cut short his 2017 season in October and would consider hiring a personal full-time travelling physio.

However, Kyrgios was still confident he was on track to launch an Australian Open tilt.

“I’ve been given a hip program that I have to do pretty much every day …and I felt good then just something like this (knee) to flare-up – it’s a bit disappointing,” he said.

“But I am happy to get through and hopefully I can manage it.”

Kyrgios arrived in Brisbane hoping to fine tune his game and ultimately turn around a poor 2017 grand slam record in which he failed to advance past the second round.

However, he didn’t look like lasting long in his first career meeting with world No.76 Ebden after calling for a medical timeout nine games into the match.

He was noticeably limping after receiving treatment and strapping to the back of his left knee.

Two games later the end appeared nigh after Kyrgios received more treatment and had his knee covered in tape by the start of the second set.

The Australian No.1 gingerly moved around the court but resisted any temptation to retire.

His tenacious approach was rewarded when he somehow outlasted Ebden in the two hour plus match and booked a quarterfinal clash with Ukraine’s world No.38 Alexandr Dolgopolov.