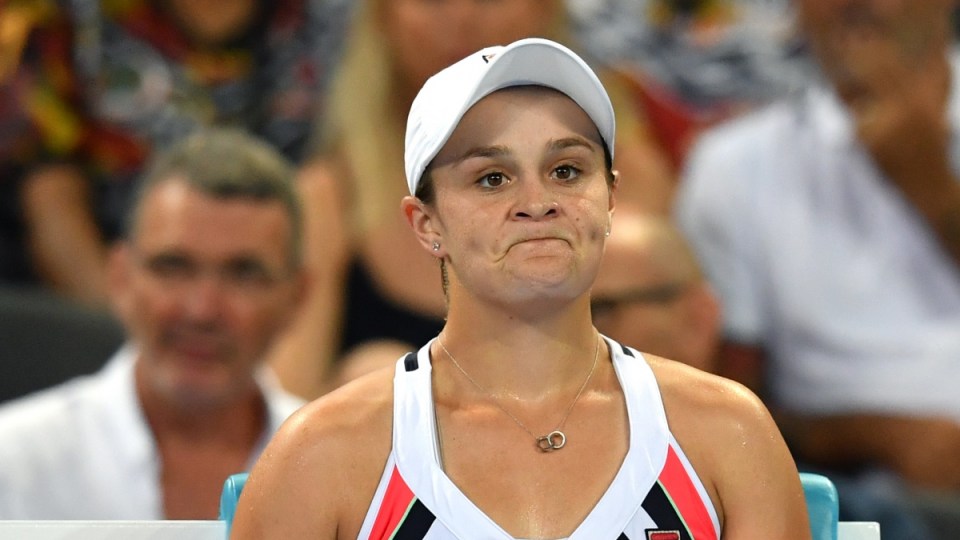 Australian No1 Ashleigh Barty did not get the start to 2018 she's hoped for. Photo: AAP

After a shock Brisbane International first-round exit, Australian No.1 Ashleigh Barty insists it was the opponent – not the occasion – that got the better of her.

World No.17 Barty was thrashed 6-3 6-2 in just over an hour by Ukraine’s Lesia Tsurenko – ranked 25 spots lower than the Australian – at a shellshocked Pat Rafter Arena on Monday night.

Eighth seed Barty admitted it felt “different” dealing with the added pressure of being the nation’s top-ranked female ahead of the Australian Open.

But the 21-year-old had no concerns about her mindset before the year’s opening grand slam, instead saluting the power-serving Tsurenko on Monday night.

“There were a few butterflies, first match of the season, at home, but it was excitement more than nerves,” Barty said.

“It’s a little bit different (being in the spotlight as No.1) but I prepare for every single match exactly the same.

“And any players in the top 50, when you’re not playing your best, they’re going to punish you.

“It’s obviously disappointing. It’s not the way I envisaged my first tournament of the year.”

Barty had arrived at her home tournament still buzzing from a stellar 2017.

She started that year at No.271, was Australia’s No.1 by October and finished in the top 20, knocking over five top 10 players along the way.

But Barty only showed glimpses of brilliance against Tsurenko, a Brisbane semi-finalist in 2013.

Tsurenko, 28, clinched the first set with her fifth ace and had her foot on Barty’s throat when she broke in the opening game of the second after the Australian double faulted.

She booked a second-round clash with 2012 Brisbane International champion Kaia Kanepi of Estonia.

Barty, who has never been beyond the third round of a grand slam, wasn’t reaching for the panic button.

“I didn’t work my butt off all last year to spit the dummy after one match,” she said.

Barty will contest the Brisbane doubles – where she is seeded second with fellow Australian Casey Dellacqua – before setting her sights on the Sydney International and then Melbourne.

Ashleigh Barty upbeat after crashing out of Brisbane International