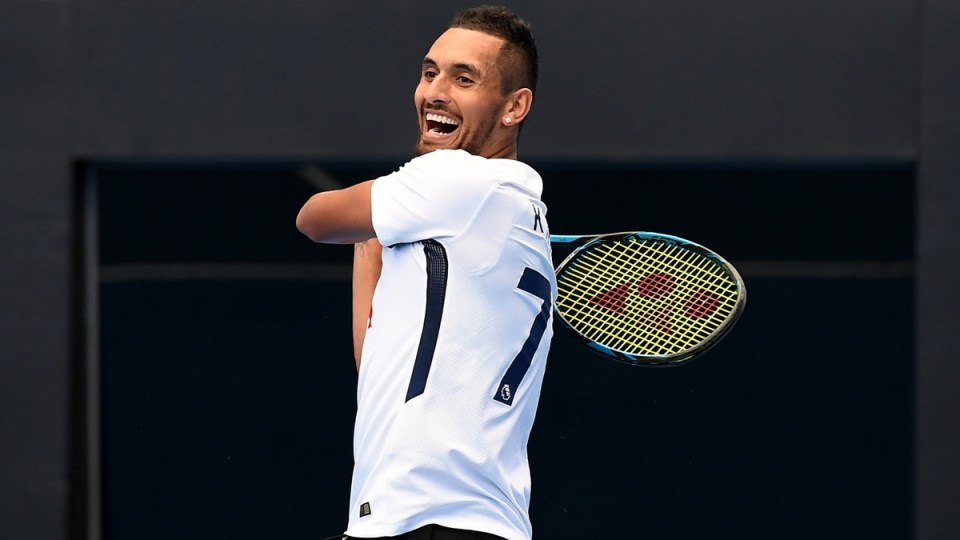 A relaxed Nick Kyrgios says changes to his training routine have left him well prepared for the 2018 season. Photo: AAP

A coachless Nick Kyrgios has traded his basketball for weights in an effort to rid himself of the hip complaint that spoiled his 2017 season.

The world No.21 spent Wednesday re-acquainting himself with Pat Rafter Arena in a training session with girlfriend Ajla Tomljanovic, before his Brisbane International debut from December 31.

The firebrand has indicated he will remain without a coach in 2018, while the 22-year-old has altered his fitness program to help his body cope with the physical demands of the tour.

“It’s tough to bring someone on when I’ve done it all on my own in the last three years to get to a career-high 13,” he said.

“It’s tough to know whether they’re doing it for the sake of getting a bit of cash or rather have the best interests at heart.

“I’m not looking for a big name, just someone who has my best interests (in mind) and can guide me. So far I haven’t really met anyone that meets those requirements and I don’t think I’m ready for a full-time coach.”

The maligned Australian endured a horror run at this year’s grand slams, failing to progress beyond the second round as he struggled with a hip complaint.

Confessing he was “scared” to have surgery, Kyrgios has instead increased his workload in the gym, tweaked his diet and played less basketball in a regimen change that he says has worked.

“I feel more ready this year than I did last year,” he said.

“I’ve taken care of my body more; I was playing too much basketball and had so many niggles going into the Australian Open.

“My discipline in the gym and my diet – I’ve been working hard and I can’t feel it when I’m hitting now.”

He said watching from home as doubles partner Jack Sock reached the ATP Finals semi-final to finish the year ranked No.8 had motivated him to do the same next year.

“I’m not the jealous or envious type at all; I’m incredibly happy for him,” Kyrgios said.

“Consistency isn’t my best trait, but I’ve beaten all the best players in the world so I know I can do it.”