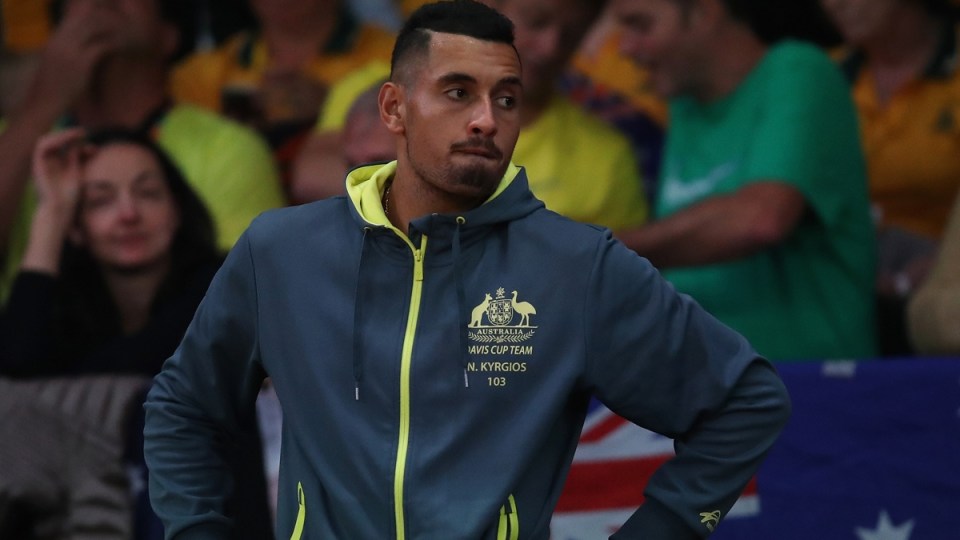 Australian tennis is hurting and it might take a while for the pain to go away.

With France beating Serbia in the other last-four clash, Australia had the chance to not only make the final for the first time since 2003, but to play host.

Nick Kyrgios even led by a set in a clash against David Goffin that would have sealed Australia’s victory, only to go down in four sets.

That result heaped the pressure on Australia captain Lleyton Hewitt, who surprised many by opting for Jordan Thompson instead of John Millman in the fifth and final rubber of the engrossing tie.

That was despite Millman being originally picked to play – and his impressive performance against world No.12 Goffin on day one.

Thompson went down in straight sets to Steve Darcis – a player he had already lost to on the ATP Tour – leaving Aussie fans to ponder what might have been if Millman featured.

“Everyone gave 100 per cent. We left it all out there. But that doesn’t make it hurt any less,” Hewitt said after the tie.

Final word from @lleytonhewitt: "I'm proud of all the boys. Everyone gave 100 percent. If it hurts, it means something" #GoAussies #DavisCup pic.twitter.com/pT1dELU8fs

Millman did not only take a set off Goffin on Friday, but he also controlled portions of what was ultimately a four-set defeat.

And he is fresh off the back of an impressive US Open, where he beat Kyrgios and Malek Jaziri before bowing out in the third round.

Hewitt’s former coach, Roger Rasheed, said fatigue was likely to have played a role in the Australian captain’s decision.

“Could both of those guys have backed up [and played] two [best of] five-set matches? Probably not – not with their levels at a premium,” Rasheed told The New Daily.

“He could have flipped it around the other way, played Jordan first [on Friday] and then Millman on day three.”

Rasheed thought that even though Hewitt’s selection raised eyebrows, it may not have made much of a difference.

“They’re both very similar in the way they play: they (Millman and Thompson) don’t have a lot of big weapons, they both hit a lot of balls back,” Rasheed explained.

“Sometimes you just have to go with your gut.”

Rasheed said the team probably hoped Kyrgios would win his two singles matches, but it was “a big ask when he has to play Goffin on the final day”.

Kyrgios had beaten Goffin in their three previous encounters, but the energetic Belgian played an incredible match to take his Davis Cup singles record to 15 wins from 16 – his only loss coming to Andy Murray in 2014.

“Nick got off to a great start to go up a set and he was serving great,” Rasheed added.

“To Goffin’s credit he played really high-quality tennis to win the next three sets.”

That set the stage for the biggest match in the career of 23-year-old Sydneysider Thompson against the 77th-ranked Darcis, 10 years his senior.

Rasheed said the experience would be invaluable in the long run.

But how should Australian tennis fans feel after going to Belgium for the beer and coming home with Brussels sprouts?

“You should hurt but you should also be proud,” Rasheed said.

Davis Cup 2017: Lleyton Hewitt’s decision may have cost us the Davis Cup