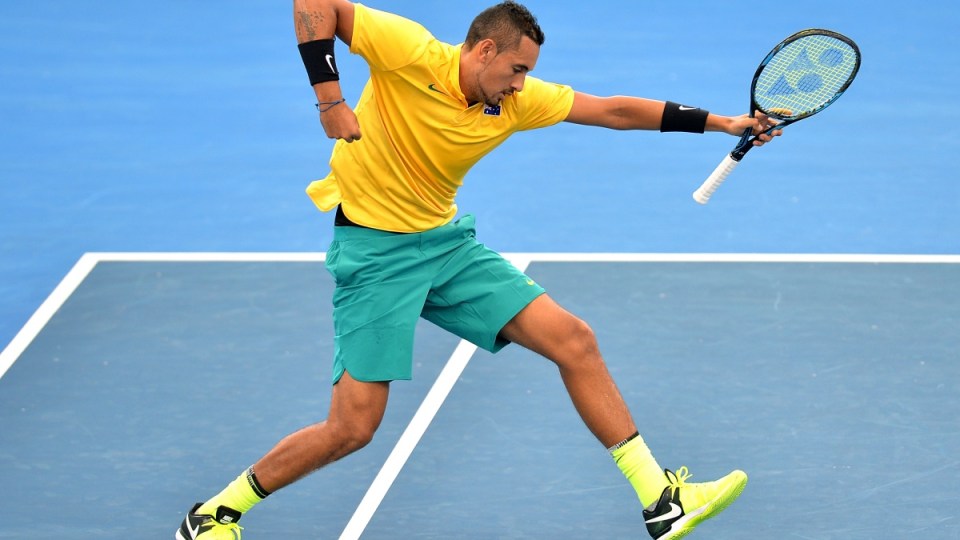 Nick Kyrgios has had a remarkable run over the past few months. Photo: Getty

Davis Cup hero Nick Kyrgios credits a change in attitude and “getting out there and delivering” for his mid-season renaissance.

And didn’t he deliver in style? Clearly enjoying life on-court, Kyrgios spearheaded Australia’s passage into the semi-finals with a 3-2 victory in the World Group quarter-final tie against the United States in Brisbane.

Kyrgios was a class above in his two singles rubbers, beating John Isner in three tough sets on the opening day before steamrolling Sam Querrey 7-6 (7-4) 6-3 6-4 on Sunday to put his country into the last four of the competition for just the second time in the last 11 years.

A trip to Belgium or a home semi-final tie against Italy beckons in September.

Kyrgios will still have plenty of critics but recent results – including two wins over Novak Djokovic and a semi-final loss to eventual champion Roger Federer in Miami – mean he’s now one of the hottest players on tour.

It’s a stark turnaround from the 21-year-old, who was booed off court following his second-round loss to Andreas Seppi at the Australian Open.

“I got booed off the court at the Australian Open. And honestly, I don’t know why,” Kyrgios said.

“I lost in five sets and I gave my best effort there.

“It was tough. I wasn’t in a good place, but I guess the one thing that fixes that is wins – getting out there and delivering.

“I thought (the crowd) really embraced me this time. I got two big wins and it’s hard not to like.”

Kyrgios said his ability to stay focused during crucial moments where previously his concentration lapsed were critical to his performance in Brisbane this weekend.

“I’m going out there and playing the game how it’s supposed to be played, and I’m playing hard,” he said.

“I haven’t been going back to the hotel hating the game or trying to just get through every day. I’m trying to get better every day, and it’s a massive difference.

“I just feel like I’m becoming a bit more of a professional.”

US Davis Cup captain Jim Courier has no doubt about Kyrgios’ potential.

“It’s all in his hands,” Courier said of the current world No.16.

“You see when he’s engaged and focused and concentrating and resilient – down a break in three different sets and found a way to win – that’s a player who can and should be top five in the world by the end of the year, if he carries that through and if he’s lucky with good health.

“It’ll be exciting to watch – it always is with him, one way or another.

“When you see players that have so much skill and charisma start to put it together, it’s exciting for everyone involved in tennis.

“Maybe not the guys in the locker room who have to play against him, but for everyone else involved in the sport, it’s a great thing if Nick can find his potential.

“He’s getting close to it.”

Australia has not made the final of the Davis Cup since the last time they won it in 2003.

From jeers to cheers: Kyrgios ‘playing tennis the right way’