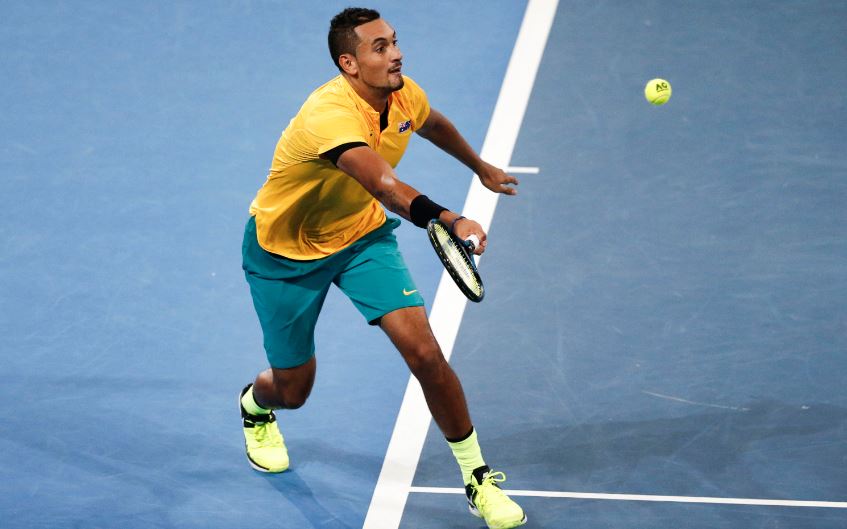 Nick Kyrgios in action against John Isner of the US yesterday in Brisbane. Photo AAP / Glenn Hunt

Nick Kyrgios has continued his stellar form to defeat big-serving American John Isner in straight sets and put Australia on the brink of the Davis Cup’s final four.

After Jordan Thompson’s shock victory over Jack Sock in the opening rubber, it leaves them just one win away from a semi-final date against Italy or Belgium in September.

Kyrgios – coming off arguably the best stretch of his career to date – looked confident and untroubled throughout.

He clawed back from 5-2 down in the deciding tiebreaker to finally end Isner’s resistance after nearly two-and-a-half hours.

“The crowd was unbelievable. Let’s hopefully close it out tomorrow,” world No.16 Kyrgios said on court after the win.

“He’s one of the best servers in the world, a proven player.

“I’ve been putting my head down and I returned really well. I’m really happy to get the win.”

It was a mature display from Kyrgios, who won through superior court coverage and generally stronger shots.

He gave away a whopping 15cm in height but still managed to out serve Isner, slamming down 20 aces to 15, many of them coming at key moments.

World No.23 Isner made a sizzling start and raced to a 3-0 lead in the first set.

But Kyrgios, 21, recovered to win it 7-5 and then held his nerve in the second-set tiebreaker.

Sock looked tired and made 66 unforced errors to 44, with his forehand – considered his biggest strength – unusually off key.

Thompson remains undefeated in the Davis Cup after winning both of his singles rubbers in February’s meeting with the Czech Republic at Kooyong.

“There could be worse ways to start,” Thompson said.

Saturday’s doubles rubber could seal the deal for Australia, with John Peers and Sam Groth due to take on Sam Querrey and Steve Johnson.