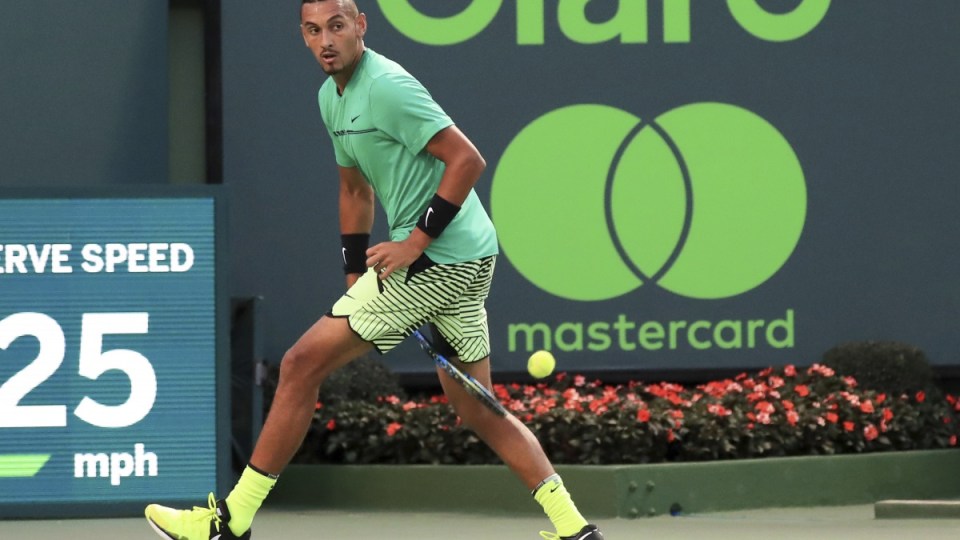 Nick Kyrgios had to fight off a spirited challenge from Zverev to win. Photo: AAP

Nick Kyrgios has booked a semi-final showdown with Roger Federer at the Miami Open after seeing off the challenge by fellow young gun, Alexander Zverev.

After world No. 20, Zverev, refused to yield in an enthralling second-set tiebreak, Kyrgios rallied to break serve in the sixth game of the third set before taking victory in two-and-a-half hours.

Australian Open winner Federer — a two-time champion at Key Biscayne and now 17-1 in 2017 — and Kyrgios were due to meet in the quarter-finals at Indian Wells two weeks ago only for the Australian to withdraw due to illness.

The fourth-seeded Federer fought off two match points before beating No.10 seed Tomas Berdych 6-2 3-6 7-6 (8-6) in their quarter-final.

Federer is now 4-0 in tiebreakers at this tournament, none of the first three as pressure-packed as the one against Berdych.

“I’m happy today to have come through somehow,” Federer said.

“I definitely got very lucky at the end. But I think I showed great heart today.”

Fourth-seed Federer was serving for the match at 5-3 and got broken, had a match point in the next game and couldn’t convert, then was down 6-4 in the breaker before winning the final four points.

Federer looked set for another emphatic victory after taking the first set but the second set is where things started going awry.

He needed only 26 minutes to take the first set before Berdych found his stride. Federer broke for 4-2 in the third, was serving for the match at 5-3 and got broken to love, then let a match point get away.

But Federer held on and was handed the victory when Berdych double faulted.

“Sick atmosphere,” Federer told the crowd afterward. “Thanks for making it very special.”

In the bottom half of the draw, unseeded Italian Fabio Fognini will face Spain’s fifth-seed Rafael Nadal for a spot in the final.

Highlights from the  Kyrgios-Zverev match