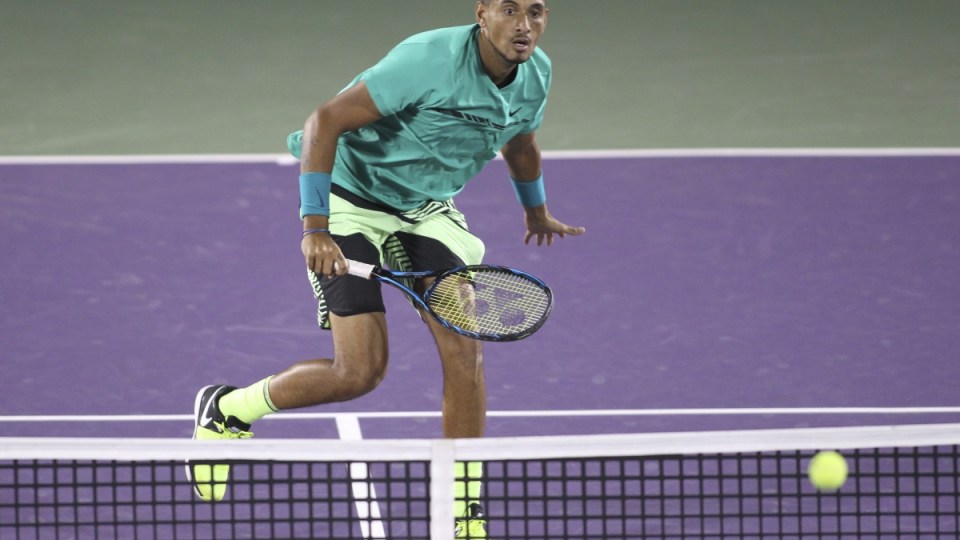 Nick Kyrgios was warned for an audible obscenity before roaring into the third round of the Miami Open with a straight-sets demolition of Damir Dzumhur.

In his first match since food poisoning ended his run to the quarter-finals in Indian Wells, Kyrgios dropped his first two service games before seizing control en route to a 6-4 6-3 win over Bosnian Dzumhur on Sunday (AEDT).

Australia’s 12th seed next faces Ivo Karlovic, who broke a five-match losing streak with a 7-6 (7-4) 6-1 victory over Andrey Kuznetsov.

He received a code violation from chair umpire Fergus Murphy for swearing at a spectator, who called out during a point.

But Kyrgios, last year’s semi-finalist, regained his composure to comfortably advance and improve his record in 2017 to 11-3.

Federer took the lead with a flawless tie-breaker after both players held easily throughout the first set, and Tiafoe then became more inconsistent with his ground strokes.

The resurgent Federer won at Key Biscayne in 2005 and 2006, and is among the favourites this year.

He is 14-1 in 2017, including his 18th grand slam title at the Australian Open and a title at Indian Wells last week.

Next up for Federer is Juan Martin del Potro, who beat Dutchman Robin Haase 6-2 6-4 in a night match.

“I would love to play against (del Potro),” Federer said, speaking before knowing who his next opponent would be.

“We’ve had some epic matches against each other. I’m sure the crowd would love to see it.”

Wawrinka lost only 13 points in his 10 service games, in a match that lasted 65 minutes.