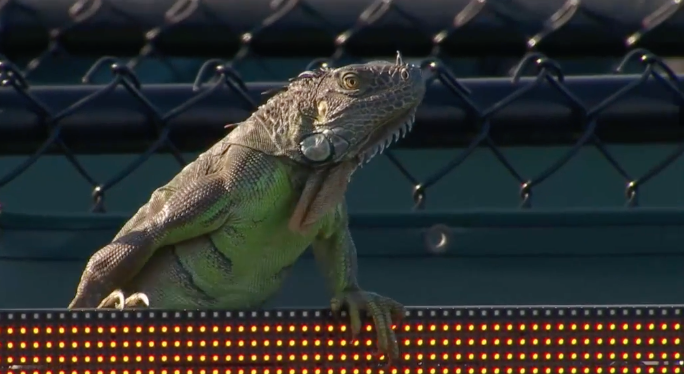 "Forget about it ... it’s not a dangerous animal." Photo: YouTube.

A tennis match in Miami, Florida, has featured a mid-match interruption that is unlikely to be topped any time soon.

A match between German veteran Tommy Haas and Czech Republic’s Jiri Vesely had to be stopped when a large iguana lizard, estimated to be about 1 metre long, made an on-court appearance.

With the score tied at 3-3 in the final set, the iguana perched himself on top of the on-court scoreboard, prompting Vesely to ask officials to remove it.

“If it’s like this, on the scoreboard, I don’t think it’s going to bother you,” an official told Vesely.

“Forget about it. It’s not dangerous, it’s not a dangerous animal. If it comes onto the court, then we can [remove it].”

After Haas got a cheeky selfie with the iguana, officials decided to intervene, with officials and helpers using a towel, a broom and a sack to try and capture it.

Special selfie @miamiopen , thanks for coming out to watch some Tennis 🎾🦎

But the sports-loving reptile did make it on the court, after initial efforts to catch it failed.

“Maybe the iguana got the note that this is most likely the last time playing here, and he wanted to say hi and take a peek or something,” Haas joked.

“I don’t know, but it was pretty cool. Of that size, I don’t think I’ve ever experienced that.

“The main thing was to try to get him safely away, that was really my main concern at the end. I don’t think it’ll ever happen again, to be honest, especially in my career, because it’s almost over anyway.”

The iguana was eventually captured and removed to rapturous applause.

Watch the efforts to remove the iguana