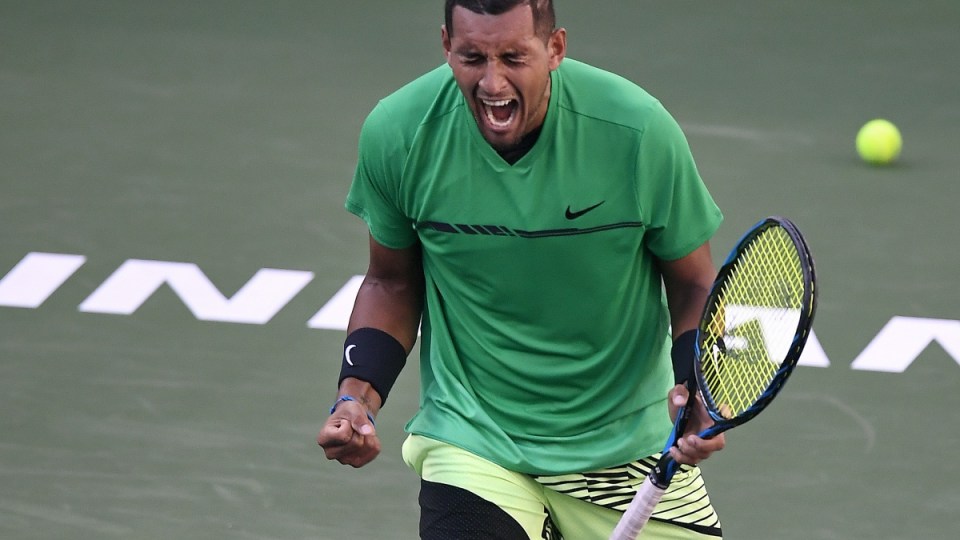 Kyrgios said that 'after a restless night of being sick I have nothing left and to play a great champion like Roger, I need to be at my best to have a chance'. Photo: AAP

Nick Kyrgios is proving to be Novak Djokovic’s nemesis on tour this year, again beating the former world No.1 in straight sets at Indian Wells.

Kyrgios hammered 25 aces past Djokovic in the Mexican Open quarter-finals, and while he didn’t quite match that serving peak in California, he still out-aced the Serb 14-3 to progress to reach the last eight.

Such was the serving dominance that Kyrgios did not concede a deuce point on his own service until the 10th game of the second set.

Eyeing his third semi-final showing in as many tournaments, Kyrgios is yet to drop serve in three matches this week.

In a battling second set, Kyrgios couldn’t capitalise on scant opportunities to break Djokovic’s serve, but he outfought the Serb to win the tie-break 7-3 to power into the quarter-finals.

The high-profile match-ups keep on coming for Kyrgios, who will next face Australian Open champion Roger Federer, who beat Rafael Nadal 6-2 6-3. 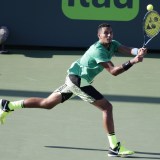 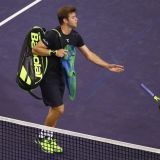 Federer needed just 68 minutes to beat his old rival, who he also defeated in the decider at Rod Laver Arena in January, setting up another super test for Kyrgios.

Kyrgios’s defeat of Djokovic saw the Serb’s 19-match winning streak at Indian Wells come to an end, also killing off his bid for a fourth consecutive title at the ATP event.

But Djokovic, who has traditionally been a supporter the Kyrgios style, had a snipe at the brash Aussie in his post-match press conference.

Asked whether Kyrgios’s on-court “demeanour” can make him a tougher opponent, Djokovic answered: “It’s his style. There is not many players like him on tour and, you know, he plays a certain way and talks and behaves a certain way which is characteristic for him.

“Obviously, it works,” he said with a broad smile.

But Djokovic had no answer to Kyrgios’ awesome firepower and sublime touch, the flustered Serb obliterating his racquet after losing the first set and constantly berating himself as the match slipped away.

In a rematch of the Australian Open final, Federer broke Nadal four times to record a third-straight win over the Spaniard for the first time in a decade.

The 15th-seeded Kyrgios clocked his fastest serve at 227 kph, and won 86 per cent of his first serve points.

Joining Kyrgios in the quarter-finals were No.4 seed Kei Nishikori, who defeated Donald Young 6-2 6-4; No.21 Pablo Carreno Busta who beat qualifier Dusan Lajovic; and No.27 Pablo Cuevas, who outlasted 11th-seeded David Goffin 6-3 3-6 6-3.

On the women’s side, No.8 seed Svetlana Kuznetsova beat 19th-seeded Anastasia Pavlyuchenkova 6-3 6-2 to reach the semi-finals.