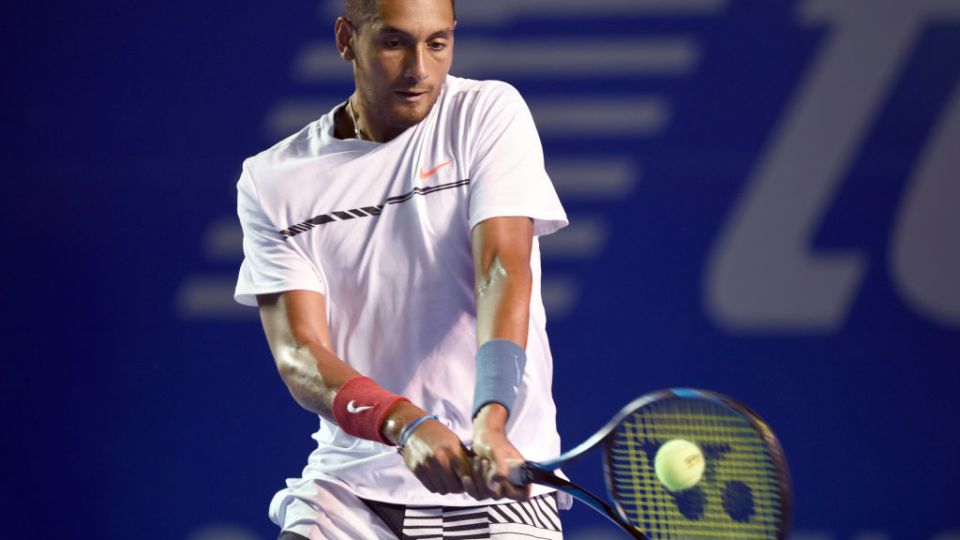 Nick Kyrgios has delivered a serving masterclass to upset Novak Djokovic and storm into the semi-finals of the Mexican Open.

Untouchable on serve, Kyrgios crunched 25 aces in just two sets to send the top seed and 12-time grand slam champion crashing out in a 7-6 (11-9) 7-5 quarter-final boilover.

“I was a little bit nervous because I’m sure the crowd was rooting for Novak. He’s one of the greatest players of all time but I’m playing with confidence.

“My serve is the best part of my game and I had one of my best serving matches tonight.”

The Australian, who hit the headlines for abusing fans and officials in a three-set win over Dudi Sela in round one at the tournament, started in superb fashion, serving 16 aces in the opener.

In reaching his second ATP semi-final in as many weeks, Kyrgios also joined his Davis Cup captain Lleyton Hewitt as the only player to have conquered grand slam giants Roger Federer, Rafael Nadal and Djokovic in their first tour-level match-ups.

While Federer, Nadal and Djokovic were all teenage up and comers when Hewitt first beat them, the trio are now bona fide legends of the game, with 44 grand slam singles titles between them and a combined 666 weeks as world No.1s.

Kyrgios announced his arrival on the world stage with a thunderous fourth-round win over Nadal in 2014 on Wimbledon’s hallowed centre court before beating Federer on clay in Madrid the following year.

His stunning victory over Djokovic on yet another different surface confirms his status as the most exciting all-court prospect in world tennis.

At just 21, Kyrgios is also the youngest player to have snared the scalps of Federer, Nadal, Djokovic, Andy Murray and Stan Wawrinka, though his success over Murray came last year at the non-sanctioned Hopman Cup.

“He is a big-serving American. I played him before and I know what to expect,” Kyrgios said.

The other semi-final will feature two-time champion and second seed Nadal against third seed Marin Cilic.

Nadal extended his winning streak in Acapulco to 13 matches with a 7-6 (7-2) 6-3 defeat of Yoshihito Nishioka. Cilic cruised into the last four without picking up a racquet after American Steve Johnson withdrew because of a right ankle injury.