Why tennis players can’t stop talking to themselves

Andy Murray’s dream of winning a first Australian Open vanished in a shock fourth-round loss to world No.50 Mischa Zverev on Sunday in a match punctuated by the Scotsman’s screams of frustration and relentless self-talk.

Murray’s on-court behaviour only goes to highlight the many strange and unseemly things our top tennis players have become known for.

Murray has a reputation for talking angrily to himself during his matches, while Rafael Nadal is known for his pre-serve routine, which includes scratching his nose and picking a wedgie.

Serena Williams has smashed her fair share of racquets in moments where anger and frustration supersede her typical grace and poise.

After winning the 2013 Australian Open, Novak Djokovic ripped his shirt open and roared to the crowd in what can only be described as a primitive expression of dominance (I should note that example is only strange, not unsightly).

One thing that seems to be a great source of confusion for commentators and spectators alike during this Open is when players engage in negative self-talk on court. 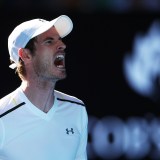 Australian Open 2017: Huge boilover as Murray dumped out by Zverev 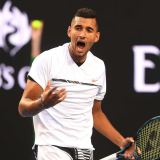 Since his most recent loss, Nick Kyrgios has been criticised for his behavioural expressions on court. We saw him shaking his head after points and berating himself.

On Saturday, commentators were surprised by Ekaterina Makarova’s apparent ‘meltdown’ in the second set, before she went on to win the match.

Have these athletes all gone crazy? After all, we often hear that talking to oneself is the first sign of madness.

One of the things that makes tennis such a great spectator sport is how exposed the athletes are.

On the court, athletes are completely vulnerable, and unlike most sports, they are forbidden from receiving guidance or coaching during the game.

The only person they can talk to

Before you judge, recent research suggests that talking to oneself is so pervasive that, all told, we spend about a quarter of our waking lives engaged in self-talk.

But if negative self-talk is really so bad, why do so many elite athletes do it? Surely, if talking down to oneself was so detrimental, Murray would have weeded it out of his performance well before he achieved his No.1 ranking.

Coaches, commentators and sport professionals seem to unequivocally encourage positive self-talk in athletes, and claim that it has performance-enhancing properties.

The evidence behind such claims, however, is not so encouraging.

In fact, contrary to both public opinion and general intuition, a number of studies have shown no detrimental performance effects associated with negative self-talk for athletes.

From a psychological perspective, self-talk is research gold. It provides an unfiltered, instantaneous insight into a person’s inner thoughts and feelings. Psychologists can spend hours with a client trying to get just a glimpse of what’s really going on in their head. But when a player self-talks aloud, we get access not only to what is being said, but to the tone, frequency, and volume of the talk.

The research on self-talk usually breaks it down into three important features:

Let’s dive a bit deeper into the research.

In a 1994 study of junior tennis players, US researchers revealed that most negative self-talk and gestures occurred following points players had lost.

This suggests that self-talk is a response to poor performance, rather than a predictor of it. So, although it’s easy in hindsight to say that negative self-talk hurt Kyrgios’ performance, the evidence does not support this view.

It seemed to help Makarova on Saturday.

Negative self-talk gets a bad wrap

While new-wave holistic reasoning suggests positivity is the way to success, the research actually shows that negative self-talk can have positive performance outcomes.

For example, negative self-talk that is instructional, i.e., “Don’t go in to the net” can guide athletes to correct an error and encourage the preferred strategy.

Negative self-talk can also have a motivational function, with research showing it can encourage athletes to try harder to avoid failure.

Oftentimes we hear that elite athletes hate to lose more than they like to win; there seems to be a masochistic element to negative self-talk that can propel athletes towards accurate execution and successful performance.

With all of the research showing no detrimental effects of negative self-talk, why do so many coaches endorse a positive self-talk strategy?

Of course, from a spectator perspective, it’s much more pleasant to watch an athlete engage in positive self-talk. We inherently associate positive expressions with victory and success.

If used as an intimidation tactic it can distract an opponent, reduce their focus and attention, and indirectly produce positive outcomes. This is a plausible explanation, but overt self-talk in tennis players typically occurs as an automatic response to the outcome of the previous point, and is not generated with purposeful intent to affect an opponent’s play.

All that being said, the actions of athletes, however odd they may seem, are almost assuredly measures used to regulate their own emotional state.

Nadal’s pre-point ritual, for example, is an attempt to gain control in an environment that seems, to him, to be entirely unpredictable.

There is no reason to eliminate Nadal’s rituals from his on-court routine, however, because they actually facilitate his performance.

Despite his success and apparent confidence, Nadal has anxiety, and his rituals provide an illusion of control. They help him to play better.

Similarly, negative self-talk is not problematic so long as it serves a facilitative function. The key, then, is to be able to identify when the behaviour is no longer helping performance, and when it begins to be a hindrance.

The ability to identify and understand different emotional triggers is a helpful first step in trying to moderate on-court behaviour. With this self-awareness, athletes can learn to regulate emotions appropriately to ensure they facilitate positive performance outcomes.

The Australian Open tennis player who has everyone confused
Today's Stories

Why tennis players can’t stop talking to themselves