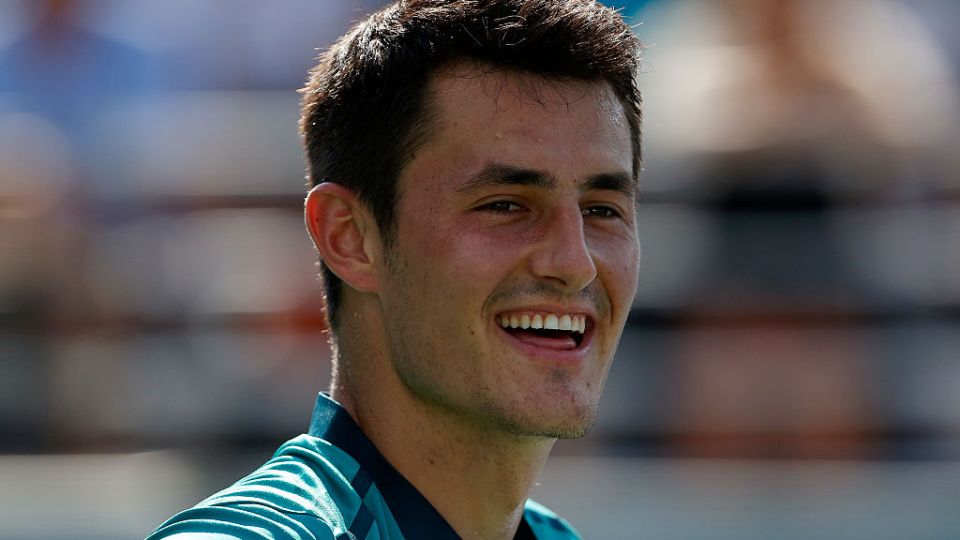 The incident occured during the Washington Open. Photo: Getty

Australia’s Bernard Tomic has been ordered off a practice court by a police officer in a bizarre incident at the Washington Open.

Footage has emerged of a police officer approaching Tomic’s hitting partner Viktor Troicki after telling the players to vacate the court due to severe weather in the area.

In the video, the policeman walks into the middle of the playing area and tells the players to “get off the court”.

Troicki, famed for his recent Wimbledon outburst at an umpire, waves his arms towards the sky complaining about the apparent lack of rain, before the policeman responds: “Do you want to knock it off now? Knock it off. Leave, come on. Let’s go.

“I didn’t ask for your permission [to get off the court], I’m telling you.”

At this point, Tomic approaches from the opposite side of the court with a cutting observation.

The argument continues for about a minute, with an irritated Tomic told that it doesn’t matter if it is not raining.

Tomic can be heard asking the policeman, “Why are you getting so close to me?” as Troicki heads off to get his equipment.

The players eventually clear the court, shuffling off in bemused fashion.

The incident proved to be a poor interruption to Tomic’s preparations, as he bowed out of the Washington Open on Friday.

The Australian had no answer to the 211cm-tall Karlovic’s booming serve, with the winner sending down 21 aces and conceding just 10 points from his service.

The tournament was Tomic’s first since he reached the last 16 at Wimbledon.

He beat Spanish pair Roberto Bautista Agut and Fernando Verdasco in his run, before losing to Lucas Pouille in five sets.

Tomic given marching orders by US cop