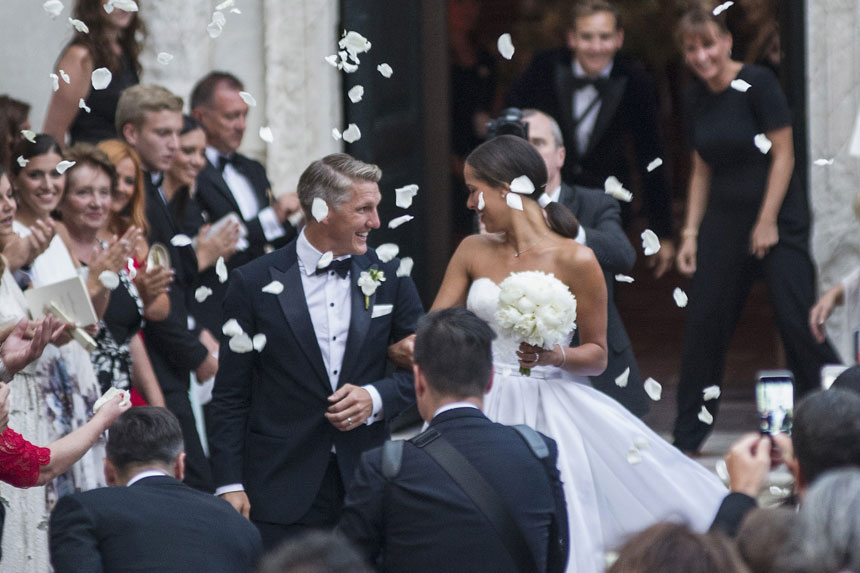 She has previously dated golfer Adam Scott and tennis player Fernando Verdasco – but soccer star Bastian Schweinsteiger is the one for former World No.1 Ana Ivanovic.

The Serbian tennis star tied the knot with Schweinsteiger in Venice this week in front of family and friends.

The pair have been dating since 2014 and held their wedding service at the town’s city hall.

Wearing all white, Ivanovic’s hair was tied back in a sleek bun. She wore a traditional white veil and a strapless dress with a sweetheart neckline and a cinched waist.

The outfit was finished with an eye-catching full-length train.

The 28-year-old opted for natural make-up and accessorised with a simple diamond necklace.

He was no doubt cheered up by the wedding, after his Germany side were knocked out in the semi-finals of the recent Euro 2016 tournament.

Hosts France eliminated the world champions earlier this month with a 2-0 victory.

Schweinsteiger, who plays club football for Manchester United in England, played 79 minutes before being substituted.

A recent event did not go to plan for Ivanovic, either, after she was bundled out of Wimbledon in the first round by Ekaterina Alexandrova.

But the disappointment is not likely to have lasted long for Ivanovic, who won the 2008 French Open.

She will now turn her attention, after her honeymoon, to preparing for the final grand slam of the tennis year, the US Open, which begins next month.

Ivanovic started dating Scott in 2009 and after a brief time apart in 2010, they continued seeing each other. The pair split up for good in 2011. She also dated Verdasco in 2008.

Of course, Ivanovic and Schweinsteiger are far from sport’s first high-profile pair to get married.

Andre Agassi and Steffi Graf – both tennis stars in their own right – famously tied the knot in 2001. The pair have two children together.

Closer to home, swimmer Lisa Curry married ironman Grant Kenny in 1984. They had three children together but split up in 2009.

And Aussie Lleyton Hewitt and Belgian Kim Clijsters – both world No.1’s in tennis – were set to marry after being together for four years, only to split up three months before their wedding.

Other relationships between sports stars included Grigor Dimitrov’s dalliances with Maria Sharapova and Serena Williams, Rory McIlroy’s relationship with Caroline Wozniacki and Radek Stepanek’s engagement with Martina Hingis, which was only brief.

The pair have been together since 2013.