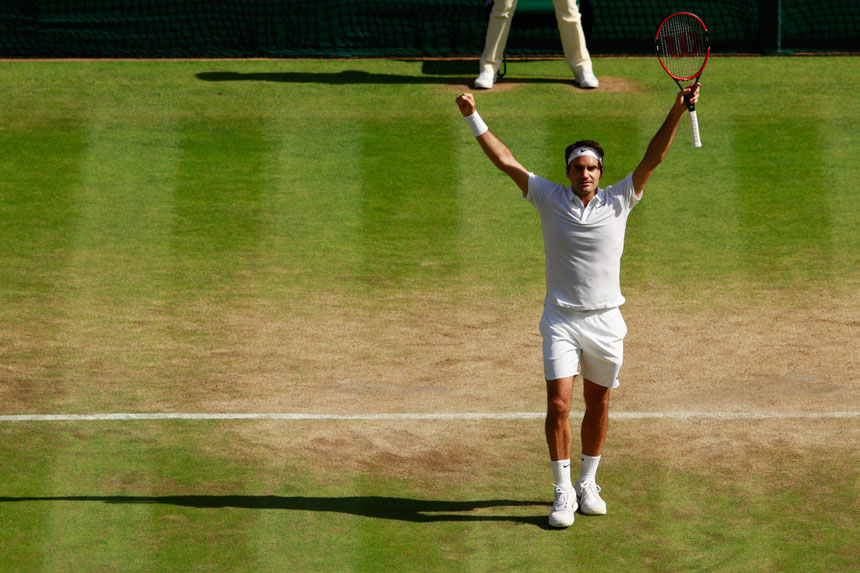 Roger Federer has acknowledged the impact good fortune is having on his bid to win Wimbledon for a record eighth time after his thrilling comeback win over Marin Cilic in the quarterfinals.

No player in tennis has won more than Federer’s 17 grand slam titles, with Pete Sampras and Rafael Nadal next best on 14 each.

• Click the owl to see the records Federer would break if he can win Wimbledon:

And the 34-year-old — who has not won a major since 2012 — may never have a better chance of achieving the ultimate glory again.

“For me the dream continues,” he said in a post-match press conference.

Federer is bidding to be the second-oldest man in tennis history to win a grand slam, behind Australia’s Ken Rosewal (37).

“I couldn’t be happier, because I fought well and I played super-great in the end. It’s great winning matches like these, coming back from two-sets-to-love.

“It’s rare. When it happens, you really enjoy them.

“Definitely felt like I got lucky to some extent today.”

Federer described his win as “epic”.

“I don’t remember coming back from two-sets-to-love here,” he said.

Federer, not just a Wimbledon favourite but one of the world’s most beloved sportspeople, could not hide his sheer delight at his come-from-behind triumph.

But, in truth, it was just the latest in a long line of fortunate moments for him at tennis’ biggest event.

Like Federer, the Spaniard is not as dominant as he once was, but Nadal did beat him in the 2008 Wimbledon final and has won five of the last six matches between the pair.

Federer has struggled against Nadal in recent years — but not as much as he has against Novak Djokovic.

The Serb has beaten Federer in six of their last eight clashes, and their last four in a grand slam.

He is also in an outstanding vein of form, having won the last four grand slam titles. But Federer avoided him, too, when big-serving American Sam Querrey claimed the biggest upset of the tournament and sent the World No.1 packing in the third round.

Wimbledon has been marred by rain, with the constant drizzle heavily impacting schedules.

Nick Kyrgios, for instance, played four days in a row before his exit, but Federer has had the luxury of an uninterrupted tournament.

Why? All five of his matches have been scheduled on centre court, the only arena at Wimbledon to have a roof.

“Roger is in [the] fourth round already and I’m still playing second round today,” Croatian Alexander Zverev said during the tournament.

“If it’s fair or not, that’s a different question.

“He [Federer] is a seven-time champion here. I can’t complain about it.

“But obviously it’s different … he’s going to get two days off … I have to play yesterday, today, and tomorrow and then maybe Monday.”

Federer’s semifinal and likely final — if he makes it — are also against opponents he has a great record against.

Federer has a 9-2 record against Raonic and has not lost to him on grass.

He has also beaten Andy Murray, who is favoured to beat Tomas Berdych in the other semifinal, the last five times they’ve played.

And, the last time Federer won a grand slam was at Wimbledon in 2012. Against Murray.