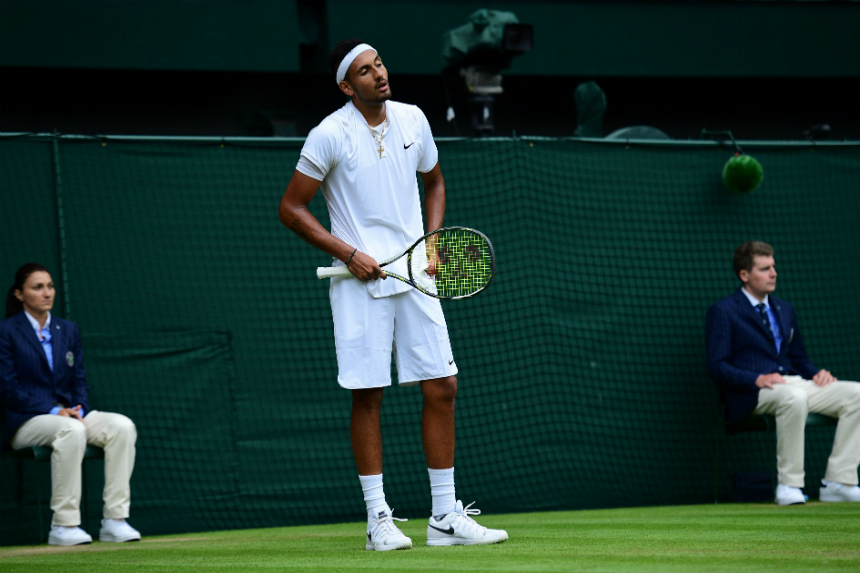 Nick Kyrgios’ attitude was again questioned after Andy Murray cruised to a straight-sets win in their last-16 Wimbledon clash on Tuesday morning (AEST).

And that meant there are no Aussies remaining in the singles draw at the grand slam, after Bernard Tomic had earlier coughed up a two-sets-to-one lead to lose a thriller to Frenchman Lucas Pouille.

Kyrgios, who did beat Murray at January’s Hopman Cup exhibition event, talked up his chances of beating the Scot in the lead-up and was hoping to get revenge for a 2015 season in which his opponent knocked him out of the Australian Open, French Open and US Open.

But Murray was simply far too good on centre court, with his array of drop shots and scorching backhands never giving Kyrgios a chance.

The 15th seed was competitive in the first set but completely lost focus in the second, yelling to himself and his support box at regular intervals – and it was that the drew the ire of tennis legends John McEnroe and Pat Cash.

“Right now, mentally, Kyrgios is not even on the court. He’s just snapped,” McEnroe told the BBC during the second set.

“Give credit to Murray because he has gotten into his head and it doesn’t look like Kyrgios wants to be out there.”

Aussie great Cash added to the BBC: “Nick Kyrgios is having a bad patch, where his concentration is going a little and he’s playing poor shots. He does this quite often.”

Wallabies legend Michael Lynagh was more forthright in his assessment on Twitter.

Well done Andy Murray. Give this guy a hiding. He is a disgrace. #Wimbledon

After the match, Murray told the BBC that the match became a lot easier when Kyrgios lost his temper.

“The first set was very tight. I managed to get the break at 6-5 but it was tight up to that point,” he said.

“The second set was much more comfortable, Nick lost his focus a bit. I was able to dictate a lot of the rallies.”

The first set was the only time Kyrgios looked like threatening Murray, with his booming serve helping him to take it to 5-5.

Murray, who hit 36 winners, produced a pair of superb backhands on the Kyrgios serve, though, winning himself three break points at 6-5.

And although Kyrgios saved two, he netted a volley on the third, giving Murray the opener.

It was after a break in the fourth game of the second set that Kyrgios lost his cool. The Aussie kept loudly saying ‘wow’ to himself at one point before angrily smashing a shot wide.

Murray seized the opportunity and quickly produced another break to easily take the second set against Kyrgios, who, due to the weather, was on court for the fourth successive day.

And while Kyrgios battled away in the third set, by that stage Murray was full of confidence as he booked a quarter-final meeting with Jo-Wilfried Tsonga.

Tsonga led French compatriot Richard Gasquet 4-2 in the first set before the latter retired with a back injury.

Tomic looked on course for a second Wimbledon quarter-final appearance after taking the third set in a weather-affected match.

But the Aussie, who was a break up in all five sets, visibly tired and tossed away a 4-2 advantage in the decider to Pouille, who will now play the winner of Tomas Berdych and Jiri Vesely.