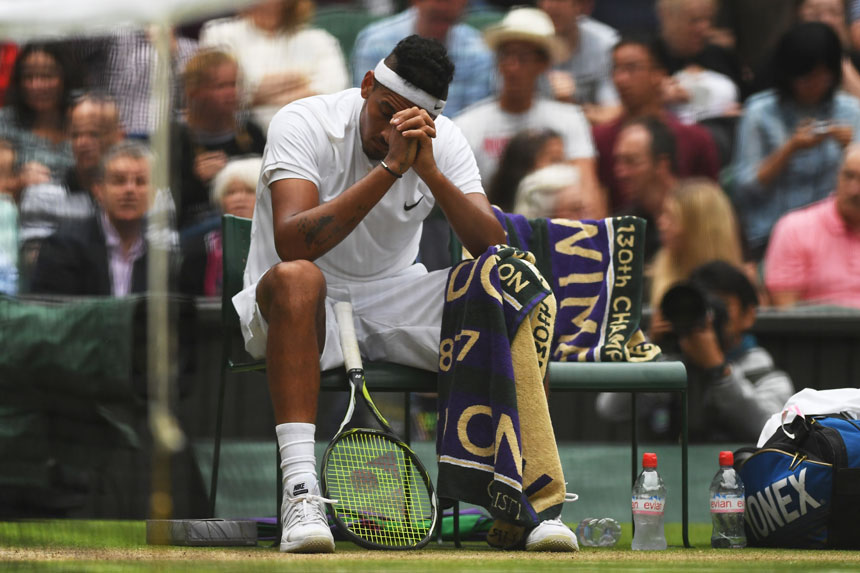 Shattered Nick Kyrgios admits he remains “a little too soft” to challenge for grand slam glory after having his Wimbledon dreams crushed by Andy Murray.

Earnestly believing he could win the title, Kyrgios was unable to hide his utter devastation after Murray buried Australia’s last hope 7-5 6-1 6-4 in a centre-court masterclass on Monday.

“It was a good first set. The rest of the match was pretty pathetic,” Kyrgios said.

“I was really comfortable out there the first set. I thought I was playing some really good tennis. I believed that I could win the match.

“As soon as I lost the first set, I just lost belief.”

Agreeing with three-time champion John McEnroe’s scathing assessment that he crumbled under the Murray onslaught, the 21-year-old world No.18 said he lost it mentally.

“I think when things get tough, I’m just a little bit soft.

“I mean, I’ve got experience, but it ultimately comes down to just laying it all out there and competing for a long time.

McEnroe implored the tennis prodigy to hire a coach after going more than a year now without a full-time mentor.

But the youngest player since the great Roger Federer to reach the last eight at two grand slam events said he didn’t think there was anyone out there capable of dealing with his wavering commitment.

“Like, one week I’m pretty motivated to train and play. I’m really looking forward to getting out there,” he said.

“One week I’ll just not do anything. I don’t really know a coach out there that would be pretty down for that one.

“I mean at times, like I’ve previously said, I don’t love the sport. But, you know, I don’t really know what else to do without it.

“I obviously like playing the game. It’s a massive part of my life but, yeah, I don’t know whether … I don’t really know.”

Despite his abject dejection, Kyrgios said it was “diabolical” to suggest he might walk away from tennis.

“I just lost in the fourth round. I didn’t lose in qualifying,” he said.