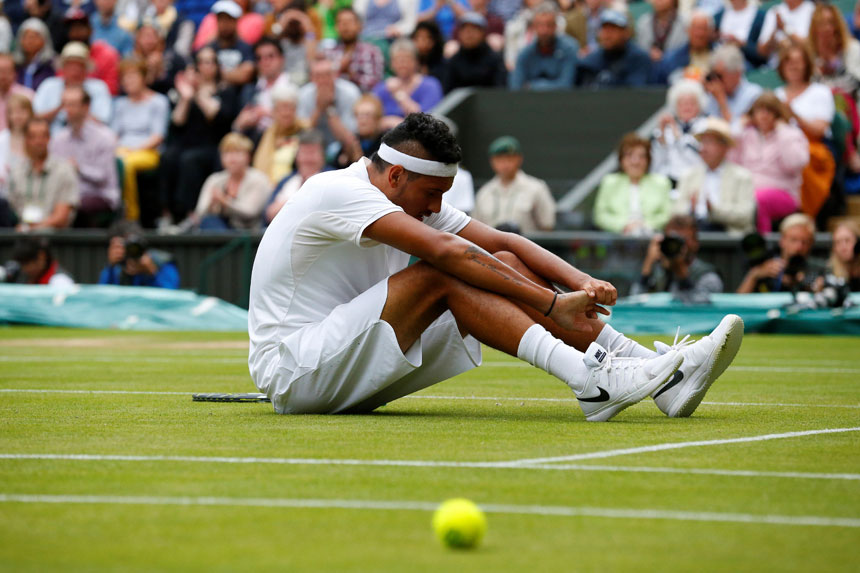 Time Nick Kyrgios stopped relying on his talent alone. Time he got more professional. Time he appointed a coach.

For a 21-year-old travelling the world playing an individual sport, to be coachless makes no sense.

And when that 21-year-old courts as much controversy as Kyrgios, it is simply unfathomable.

The Australian has played without a coach since splitting from Todd Larkham before last year’s Wimbledon. He desperately needs guidance. He needs a hard-but-fair mentor.

For those who got up early to watch it, Kyrgios’ straight-sets Wimbledon defeat to Andy Murray on Tuesday (AEST) was the perfect summation of his career to date.

He started superbly. His big serves and powerful groundstrokes tested the World No.2 in a match that, while he was not expected to win, was far from a foregone conclusion.

Then came the period when Murray worked harder than him, a subsequent Kyrgios meltdown and a spell where the Aussie looked like he’d rather be anywhere else.

There is no bigger stage in tennis than centre court at Wimbledon yet Kyrgios looked disinterested.

Kyrgios has beaten five top-10 players on the ATP Tour in 2016 and, while not working as hard as he should, which he freely admits, he is ranked 18th.

In a brutally honest post-match press conference that revealed much about his state of mind, the Aussie said his effort against Murray was “pathetic” and “soft”.

“It was a good first set. The rest of the match was pretty pathetic,” he told reporters.

“As soon as I lost the first set, I just lost belief. I think when things get tough, I’m just a little bit soft.”

He then went on to ponder whether a coach would even want to work with him.

“One week I’m pretty motivated to train and play. I’m really looking forward to getting out there.

“One week I’ll just not do anything.

“I don’t really know a coach out there that would be pretty down for that one.”

If Kyrgios is serious about his tennis career, he cannot maintain those habits.

And surely a long list of coaches would love to work with him. Imagine how good he could be if he worked as hard — or even close to as hard — as his ATP Tour rivals.

After all, Kyrgios has all the attributes of a great player. He covers the court superbly for a man his size, is supremely skilled and wins a lot of ‘free’ points with his big serve.

Novak Djokovic should be a classic example for Kyrgios.

He is now tennis’ top dog, and comfortably, but it wasn’t always that way.

Djokovic was once the butt of jokes on the ATP Tour for his regular retirements and illness problems.

He was also known for his temper.

In 2010, he added Dr Igor Cetojevic to his team of coaches and, on his advice, took up a gluten-free and largely dairy-free diet.

Dr Cetojevic travelled by his side for the next year, either telling him what to eat or making the meals himself.

He became No.1 in the world.

Djokovic won 43 matches in a row in 2011 and claimed 10 titles including three grand slams. He hasn’t looked back.

It shows what having the right people around you can do.

Nick, you can’t do it alone.