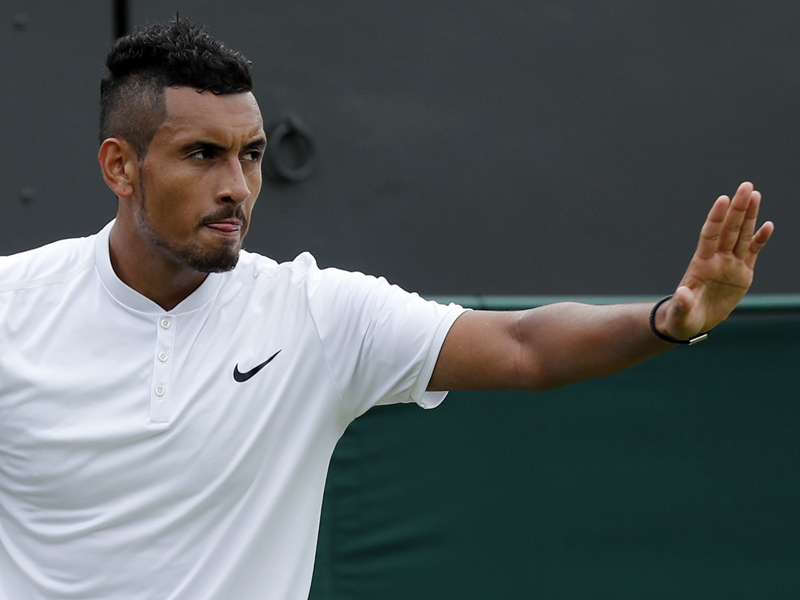 Nick Kyrgios branded his box “retarded” before darkness denied Australia’s big Wimbledon hope a place in the fourth round alongside countryman Bernard Tomic.

While Tomic charged to a 6-2, 6-4, 6-4 win over 14th seed Roberto Bautista-Agut in less than two hours, Kyrgios must return on Sunday (local time) after his third-round clash with Feliciano Lopez was suspended for the night locked at one set apiece.

Hoping to set up a last 16 showdown on Monday with new title favourite Andy Murray, Kyrgios won the first set 6-3 and dropped the second 7-6 (7-2) in a tie-breaker before play was stopped.

Kyrgios required a medical time-out for a nose bleed during the first set, but that will be the least of his concerns.

As well as having to quell the Lopez threat, he can expect almost inevitable backlash for his latest outburst.

Just two days ago, Tomic was forced to apologise for saying he felt “like a retard” while being left waiting on court for eight minutes for his second-round opponent — another left-handed Spaniard Fernando Verdasco — to arrive.

Kyrgios was furious at his entourage for not offering enough vocal support during his tight tussle with Lopez on show court one and social media was quick to light up with criticism of his conduct.

He also received a code violation for belting a ball in frustration after dropping serve in the sixth game of the second set.

But the suspension will at least give Kyrgios the chance to cool down and regather himself, as he attempts to make the second week at the All England Club for the third straight year.