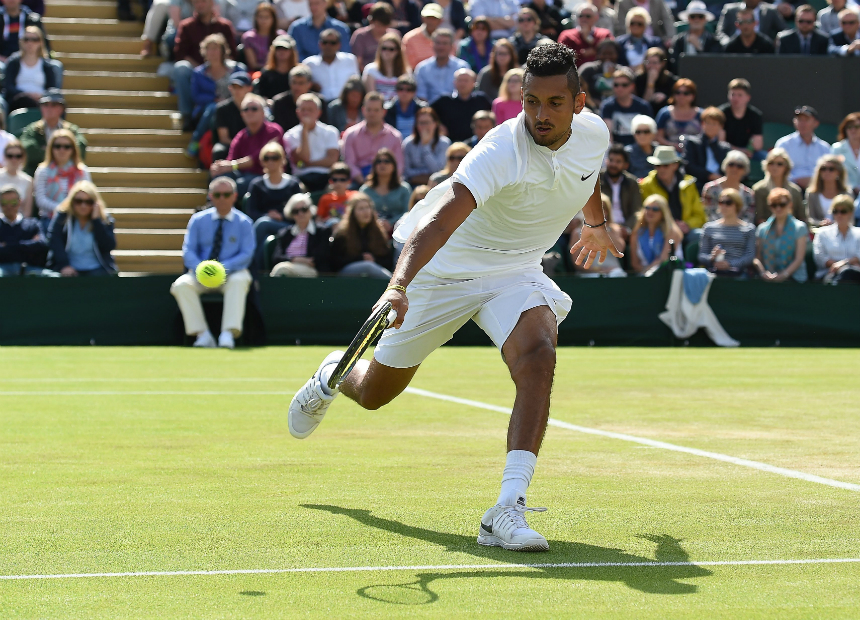 Nick Kyrgios is in hot water after a heated exchange with media in a Wimbledon post-match news conference followed multiple outbursts in his second-round win on Saturday morning (AEST).

The 15th seed took exception to a question from a journalist when asked about his antics during a weather-interrupted five-set triumph over German Dustin Brown.

• The AFL finally gives women what they want
• This could be one of sport’s great fairytales
• Is this the sign Nick Kyrgios is maturing?

Kyrgios, who had to sit through three rain delays before posting a 6-7 (3-7) 6-1 2-6 6-4 6-4 victory, received a code violation for swearing during the third set and clashed with umpire Jake Garner.

He was fined $3360 for swearing during his first-round win over Radek Stepanek and a similar sanction looks likely after he was warned for an “audible obscenity”.

In his post-match media conference, Kyrgios, who hit 27 aces, went on the offensive when asked if his behaviour was distracting for other players.

“What did I say to the umpire today?” he said.

Another reporter reminded Kyrgios that he told American Garner his decision making was “horrendous”.

“Can you answer my question?”

When Kyrgios was reminded by the reporter that it was the player’s role to answer questions rather than ask them, Kyrgios added: “No, it’s not. He actually asked me the question. It’s his question, mate. It’s his question,” he said.

“What did I say to the umpire today? So how is that going to affect another player by saying ‘horrendous job’?

Kyrgios, who sided with fellow player Viktor Troicki and called the tournament’s officials a ‘f*n joke’ on Twitter on Friday, was angry after Garner ruled a ball had bounced twice before he hit a shot in the third set.

He told the umpire: “That’s just unbelievable, dude. Not that it mattered, because he would have had an easy ball.

“That’s just horrendous by you guys, once again.”

Shortly after, Kyrgios was given his code violation warning for swearing.

Brown then took his turn to question officials after the third game of the third set.

“You got to concentrate a little bit,” he told the umpire.

The incidents took some gloss away from what was a thrilling match full of big serves, trick shots and winners.

There was always going to be a ‘tweener in this match, wasn’t there?#Wimbledon https://t.co/7O6dt2wHfd

Long rallies were not common as the match time was just two hours and five minutes.

After the first rain delay, Brown and Kyrgios made it through just three points – the former led 30-15 – when the weather intervened again.

Almost three hours passed before play finally resumed after midnight (AEST), and it was Brown who held serve in the sun to start brightly.

Kyrgios struggled to deal with his serve-and-volley in the first set, and Brown produced two classic shots in the tie-break to claim the early momentum.

The Aussie’s response was most impressive, though, as he raced through the second set in 19 minutes before an incident-marred third.

Kyrgios looked in trouble after conceding that, but again hit back emphatically, with his swift retort setting up a fifth set.

Fans were unhappy when more rain caused an interruption, particularly with the game so delicately placed at 3-3 in the decider – and with Kyrgios having a break point.

But once play resumed again, after 3.30AM (AEST), Kyrgios held his nerve, claiming the break point at the fifth attempt before hanging on for victory.

He will now play Spaniard Feliciano Lopez in the third round. The 22nd seed came from two sets to love down to defeat Italian Fabio Fognini.