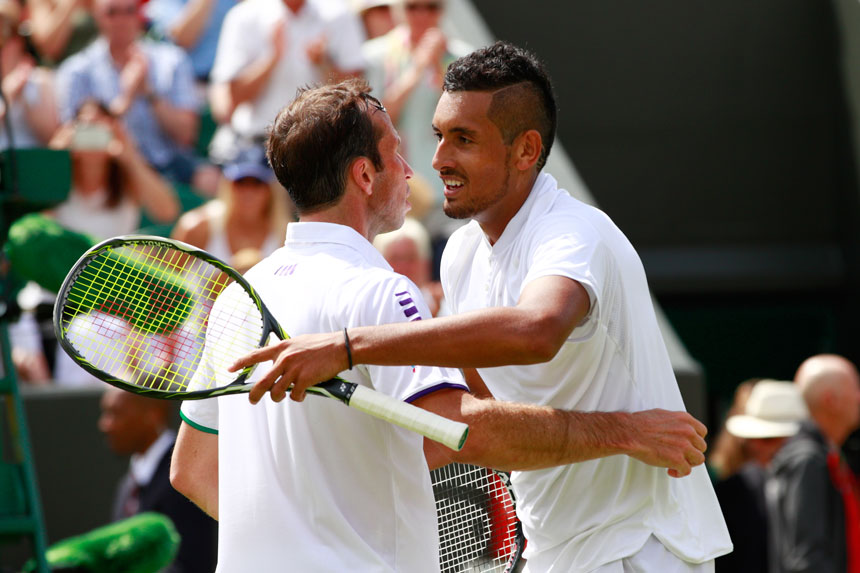 Nick Kyrgios’ days without a coach might be over after the Aussie declared he’d be very open to work with Czech veteran Radek Stepanek.

The 21-year-old has been without a coach since splitting from Todd Larkham before Wimbledon last year in a “mutually agreed” decision, he told his official website.

And it’s been a year full of incident, with constant controversy — but also success — for the Canberran who has lacked a guiding presence.

He was heavily sanctioned for his crude on-court sledge towards fellow player Stanislas Wawrinka, clashed with umpires and crowds, had a row with Davis Cup team-mate Bernard Tomic and was involved in social media disputes with AFL footballers and Australian Olympic Committee chef de mission, Kitty Chiller.

After his win over Stepanek, who is nearing the end of his career, Kyrgios told reporters at his post-match press conference: “I mean, I don’t really know what I want yet with a coach.

“So, for me, just to have him [Stepanek] give me advice here and there, while his career is still going … you never know.

“When he stops, he might step into a role where I might bring him along to tournaments. I don’t know.

“I’m more than willing to give it a go with a guy like that, that has had such great success for a long time.”

Kyrgios added that his relationship with Stepanek had “just sort of happened” and that they were “great friends”.

The 37-year-old Stepanek is currently ranked 31st in the world.

He was ranked eighth at his highest in 2012 and has won five singles titles and 18 in the doubles arena. Stepanek’s career earnings are over $US11 million.

Kyrgios worked with Larkham from the age of 10 and the pair spent seven years working with each other.

Simon Rea then took over and was coach when Kyrgios shocked Nadal at the 2014 edition of Wimbledon.

The duo split after that, with Larkham — aided by another former Australian player in Josh Eagle — next to take on the prodigiously talented Kyrgios.

Kyrgios said on his official website he would “work closely with my team and Tennis Australia through Wimbledon and we will regroup after the tournament in order to figure out the best plan for the future” after his most recent split with Larkham.

But, like many others who have praised Kyrgios, he also made mention of his need to control his emotions better.

“He’s got an opportunity to be something spectacular,” McEnroe told BBC Five Live.

“I really believe he can be the best player in the world.

“If he gets his head together and figures out how [to control his emotions] … I mean I saw him today where it looked like, late in the third set after he’d blown a few match points, to me it looked like he stopped trying.

“When he was still like a couple of points from winning the match … if he is that fragile he’s not going to win majors.”

Kyrgios faces German Dustin Brown in the second round. The world number 85, who beat Nadal at Wimbledon in 2015, toppled Serbian Dusan Lajovic in five sets in his first round match.

If Kyrgios progresses from that encounter, Spaniard Feliciano Lopez is his likely opponent in round three. Lopez is seeded 22nd.

A meeting against Scot Andy Murray may then follow in the fourth round.