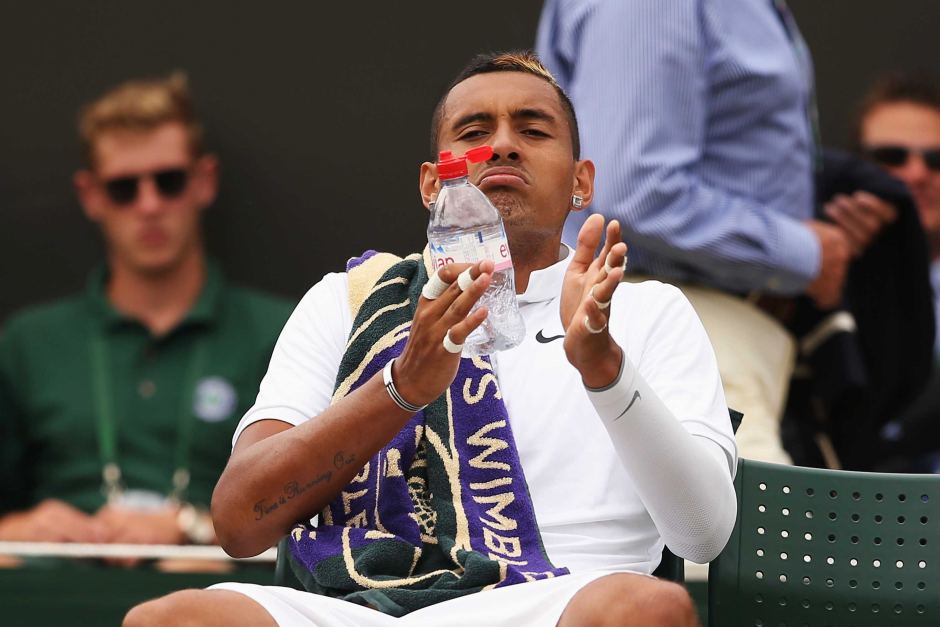 Brimming with confidence, Nick Kyrgios believes he is a genuine chance of winning Wimbledon.

Torrential rain wiped out the final round of qualifying in London, but it certainly did not dampen Kyrgios’s spirits on the eve of the upcoming draw at The All England Club.

• Crows too good for faltering Kangaroos
• Too short: Nike has a Wimbledon dress problem
• Iceland win causes commentator to lose the plot

Ranked 18th but seeded 15th, Kyrgios welcomed his all-important promotion with a warning to his rivals.

“That’s massive. Obviously Wimbledon for me is the greatest chance on stats and previous results that I can go deep at a grand slam and obviously push to almost win it,” he said after dazzling fans with his shot-making and charisma at The Boodles exhibition event.

“So to be seeded in the top 16 and not hit one of those top-eight guys until the fourth round, that’s massive, and it’s obviously the first time in my career that I’ve been in that position as well.

A quarter-final appearance on debut in 2014 and fourth-round showing last year has bookmakers listing Kyrgios as the sixth favourite for the title behind only grand slam giants Novak Djokovic, Andy Murray, Roger Federer and Stan Wawrinka and his Queen’s conquered Milos Raonic.

At 21, Australia’s big hope is bidding to become the youngest champion since his mentor Lleyton Hewitt reigned in 2002.

In his first outing since his loss to Raonic last week, Kyrgios only managed one set, which he won 6-4 amid a flurry of aces and other unreturnable bombs.

But he said even that 40-minute court time was important.

“Even though I lost first round last week in Queen’s, I still feel I played pretty well,” Kyrgios said.

“Obviously Milos is playing unbelievably. He made the finals and he was up a set and a break against Murray.

“So I obviously lost to a quality player and I had chances to win that.

“So I was always confident even if I didn’t get on today, but that’s massive to get some more match play and against a quality player like Monaco as well, that’s priceless.”

He may polarise fans elsewhere, but Kyrgios wowed spectators in the garden-party atmosphere in Buckinghamshire, the setting for many a James Bond scene and where Bridget Jones goes for summer strolls.

A champagne cork flew onto the court at one point but it was Kyrgios who delivered a bottler display as fans sat transfixed wondering what trick shot the flamboyant performer would try next.

The umpire called a suspension in play with the Australian up 5-4 only to quickly follow up with: “Ladies and Gentleman, the players are continuing” after Kyrgios urged Monaco to carry on in light drizzle.

The gesture prompted a huge roar from the crowd won over by Kyrgios, who dubbed the event the perfect Wimbledon warm-up.

Fellow Australians Luke Saville and Matt Barton were not so fortunate as flash flooding in the Wimbledon area and nearby Roehampton, home of the qualifying event, stalled their shot at making the main draw.

Saville and Barton will return on Friday – after the draw 7:00 pm (AEST) – to play their final-round qualifying matches.