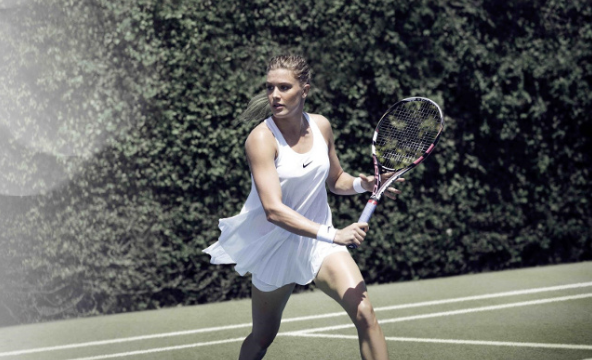 Nike has been been forced to recall a proposed dress for tennis stars to wear at Wimbledon after players complained about its length.

The dress, which 20 players including Eugenie Bouchard and Australian Open semi-finalist Johanna Konta were to don on court, is so short it has been used as a top by one player.

A number of players complained the dress flies up above the waistline during play, distracting them from their game.

In a rush to fix the mistake, Nike wrote to its players to request they return the dress immediately so it can undergo alterations, the Daily Mail reported on Thursday.

Nike has just three days to make the changes ahead of the grand slam tournament with the most stringent dress code.

‘We need to make a small change’

The dress, which could easily pass for a top, was paired with long white leggings by Czech player Lucie Hradecka during Wimbledon qualifiers this week.

According to the Daily Mail, Nike wrote a letter to the 20 players issued the dress requesting they return them for alterations.

“We need to make a small change to your dresses per Wimbledon rules,” the email reportedly read.

“Could you please bring them by the Nike Wimbledon House.”

Next, in bold and underlined type, read the words: “this is VERY important”.

Fortunately, Serena Williams – the game’s biggest female name – had a different version of the dress designed specifically for her.

Speaking to the Daily Mail, Wimbledon’s All England Club said it had approved the dress because it complied with its famous colour regulations: it’s white.

For those lucky enough to compete, following Wimbledon’s strict dress code is quite simple: don’t wear anything that isn’t white.

In case that rule isn’t clear enough, rule number two reads: “White does not include off-white or cream.”

But the code hasn’t stopped a number of controversial outfits from rocking the past tournaments – and entering into fashion history.

In 1949, American player Gussie Moran shocked the English crowd with her frilly underpants.

She famously became the first woman to play with pants designed to be visible.

Shocking for a different reason was Anne White’s Wimbledon get-up in 1984.

And in 2002, new kid on the block Anna Kournikova earned her place on teenage boys’ bedroom walls around the world when she wore a two-piece outfit that bared her midriff.

The Nike design used as Lucie Hradecka’s shirt at Roehampton is going to be Genie Bouchard’s dress at #Wimbledon: pic.twitter.com/r3YI8bVhNw

Too short: Nike has a Wimbledon dress problem