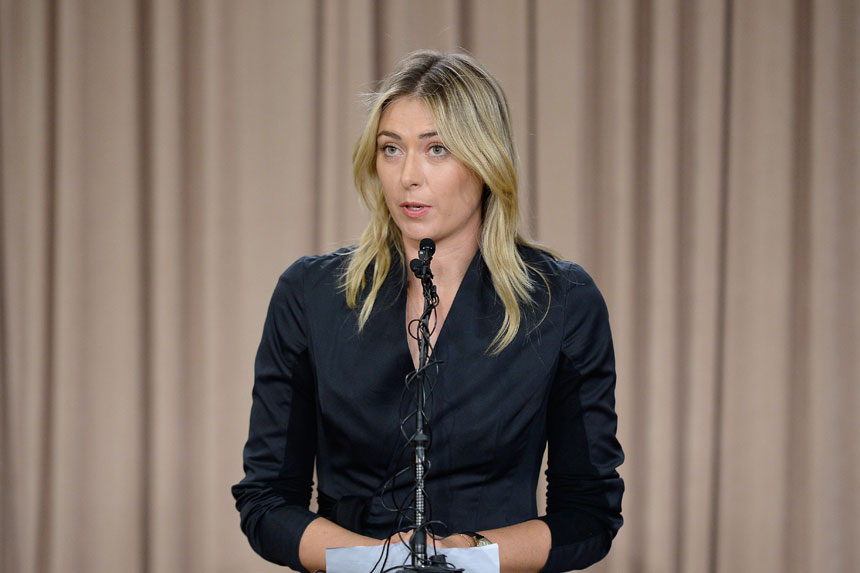 Maria Sharapova says she is above commenting on Eugenie Bouchard's attack. Photo: Getty

Maria Sharapova’s financial empire might not be the crumbling mess many thought it would be.

After news emerged that the Russian tested positive for banned substance meldonium at January’s Australian Open, sponsors jumped off in droves.

Porsche and TAG Heuer suspended their deals, worth a reported $A3.75 million each per year, and worse was to come.

Nike also suspended its eight-year, $A93.7 million contract with the 29-year-old, which was signed in 2010.

In stark contrast, her racquet sponsor Head said it would look to extend its deal with Sharapova.

When a verdict was delivered by the International Tennis Federation (ITF) early on Thursday morning (AEST) – banning Sharapova from tennis until January 25, 2018 – things didn’t look good for her portfolio.

Sharapova immediately announced she would appeal the decision to the Court of Arbitration for Sport.

But it seems her sponsors are sticking with her, with Head and Nike both releasing supportive statements following her appeal. Porsche and TAG Heuer are yet to respond.

Head was particularly forthright, saying the ITF’s decision was “flawed”.

The company said in a statement that the ITF’s choice to ban meldonium – the anti-ischemic drug that improves circulation, particularly in the brain, but is used to treat heart conditions – was based solely on the number of athletes using the substance, with an absence of “any scientific evidence” or “extensive clinical testing”.

“We believe, based on the facts and circumstances provided to us, that this is a flawed decision. Head will continue to stand by Miss Sharapova.”

‘We hope to see Maria back on court’

Given Head’s ongoing support for Sharapova, its response was not as surprising as Nike, which backflipped on its contract suspension.

“The ITF Tribunal has found that Maria did not intentionally break its rules,” Nike said in a statement.

“Maria has always made her position clear, has apologised for her mistake and is now appealing the length of the ban.

“Based on the decision of the ITF and their factual findings, we hope to see Maria back on court and will continue to partner with her.”

Nike’s decision is a significant financial boost for Sharapova, who is expecting $US20 million in sales from her confectionary company Sugarpova in 2018, Forbes reported in January.

She was Forbes’ highest-paid female athlete for 11 years in a row, only replaced by fellow tennis star Serena Williams in the 2016 edition.

‘She got off pretty lightly’

She was facing a maximum of four years and, as reported by the BBC, went to significant lengths to hide her use of meldonium before her positive test.

“My gut feeling is if you’re a professional athlete and you know you’re taking a performance-enhancing drug, which she clearly was … then two years, I think she got off pretty lightly,” Cash told the ABC.

“I think her career and reputation is absolutely shot to bits.

“The question mark is, she has been taking the drugs for so long, how much does it help her get through these hot days in Australia, those long matches in the stinking heat of New York or wherever else it happened to be?

“She’s going to be able to recover much better than the other athletes. How many matches has this helped her win?

“It wasn’t on the banned list [until 2016], but it was performance-enhancing.”

Former world No.1 Caroline Wozniacki said strong penalties were needed to maintain the integrity of tennis.

“Tennis has a really strong anti-drug policy in place and it helps the sport really keep clean,” she told the BBC.

“It’s always a sad situation when someone is getting banned or you have heard they have failed a drug test, not only for Maria, but for tennis in general.”