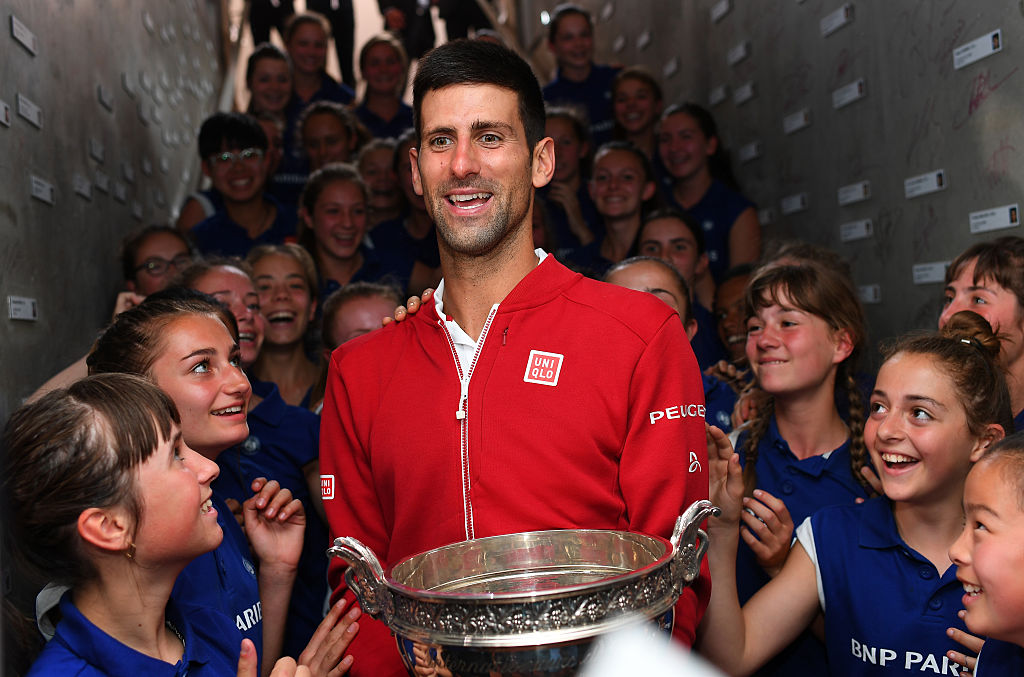 Djokovic is only the third man after Don Budge and Rod Laver to hold the four majors at the same time, and the eighth man to triumph at Wimbledon and the French, US and Australian Opens.

The world number one recovered from a nervous start to impose his pace on Court Philippe Chatrier and clinch his 12th grand slam title after three previous failures in Roland Garros finals.

“It’s a very special moment, possibly the biggest moment in my career,” the 29-year-old, who now has a 5-2 win-loss record against Murray in grand slam finals, said courtside.

Djokovic imitated former three-time champion Gustavo Kuerten by drawing a giant heart in the Paris clay before collapsing inside it.

“I drew the heart on the court, like Guga who gave me permission to do,” he said.

“My heart will always be with you on this court.”

Djokovic appeared to have made the dream start, taking Murray’s serve to love in the first game.

But the Briton, who was playing his 10th final at a major, hit the ball early to set up three break points in the following game, converting the third with a fine lob.

Tension threatened to boil over when Murray shouted “get him out”, pointing to a French TV interviewer who had climbed uninvited into his player’s box overlooking the court.

Djokovic then argued with umpire Damien Dumusois for refusing to have a point replayed at 15-0 as Murray served for the first set.

Murray, who beat Djokovic in the Rome Masters final on clay last month, went on to win the set when his opponent netted a backhand.

The world number one had to shake off a break point in the opening game of the second before Murray obligingly imploded, winning just one game for the set.

Djokovic raced to a 4-1 lead in the third set, breaking in the fifth game with a delicate angled drop shot that triggered chants for the Serb in the stands.

There was no comeback in that set for the 29-year-old Murray, who then dropped serve in the opening game of the fourth set.

Djokovic, who is now on a 28-match winning streak in grand slams, broke to love to lead 5-2.

Murray pulled a break back but Djokovic shook off late jitters to win the title on his third match point when the Scot netted a backhand at the end of a nail-biting rally.