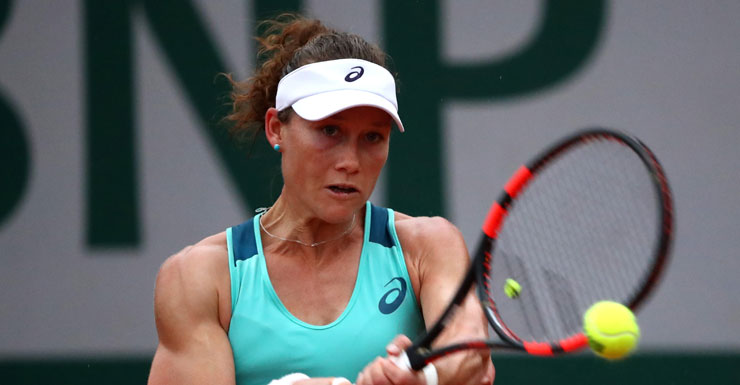 For the second time in a week Samantha Stosur’s French Open charge has been halted by the temperamental Parisian weather.

Stosur, whose first-round match with Japan’s Misaki Doi was played across two days due to persistent rain which forced a backlog of clashes, was able to get through just 44 minutes of her fourth-round clash with sixth seed Simona Halep on Sunday (local time).

The 21st seed is down a break and trails 5-3 in the first set against Halep, with a quarter-final spot against either world No.2 Agnieszka Radwanska or Bulgaria’s Tsvetana Pironkova on the line.

Radwanska held a healthy 6-2 3-0 over Pironkova before their match was also halted due to rain on a day in which Canadian Milos Raonic was shocked in the men’s draw.

Play will resume on Monday at 7pm AEST, although more rain is forecast.

A late switch took the pair from from the showpiece Court Philippe Chatrier to court one, the match finally getting underway in front of a few dozen fans at 7.51pm with the threat of further rain ever present.

Stosur, who hailed her third-round victory over 11th seed as good as any from her previous deep runs at Roland Garros, again started strongly against Halep.

The 32-year-old hit 12 winners as her power game caused problems for her younger, more-fancied opponent.

But the high-risk approach of going for winners had its drawbacks as Stosur racked up just as many unforced errors (12) compared to Halep’s six.

Stosur squandered three break point chances with Halep serving down 3-2, and bolstered by her big hold the Romanian immediately broke the Australian to take a 4-3 lead and the early advantage.

Sensing the importance of winning the break back before the rain hit, Stosur unleashed on Halep’s serve in the following game – but it was to no avail as the 24-year-old produced some extraordinary tennis to hold.

In completed matches in the women’s draw, Garbine Muguruza of Spain recorded a 6-3 6-4 win over Russian Svetlana Kuznetsova.

And unseeded American Shelby Rogers – who stunned Petra Kvitova earlier in the tournament – won by the same scoreline against Romanian Irina Begu to book a quarter-final berth.

Ramos-Vinolas had only won four grand slam matches before the French Open, but the 28-year-old will now meet defending champion Stanislas Wawrinka.

Stosur halted by rain as Raonic has Paris shock