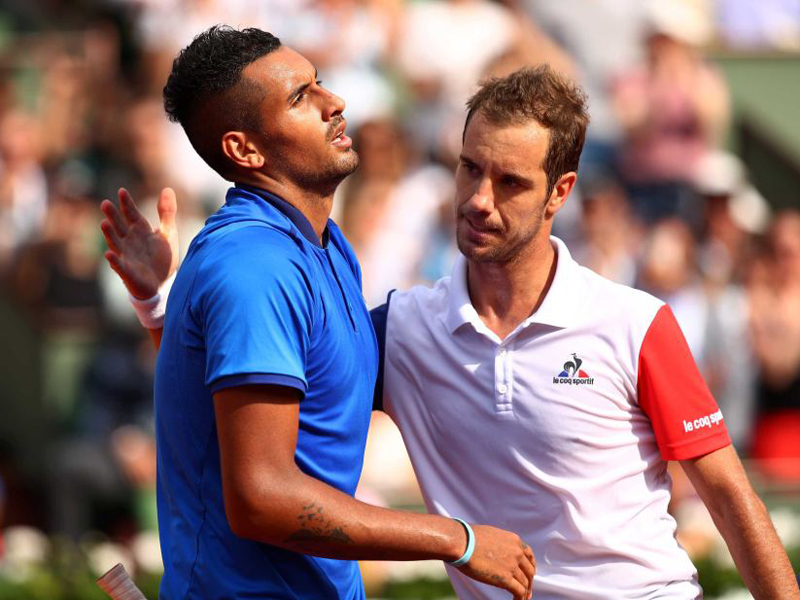 Kyrgios screamed 'Get out of my box'.

The 17th seed entered the claycourt grand slam as the consensus dark horse on the back of promising performances on clay in reaching the semi-finals in Estoril and quarter-finals at the Madrid Masters.

Little went right for Kyrgios, however.

In the break between the first and second sets, he received loud boos from the French crowd after breaking his racquet against an advertising board.

Kyrgios’ support team, including brother Christos, copped an earful from an angry Kyrgios’ after he lost a tense second set tiebreaker.

His brother left the stands, but it did not help Kyrgios’ form, with Gasquet securing a break in the third game of the third set.

Kyrgios had walked into Roland Garros with the second-best record against top-10 players in 2016, behind only raging hot favourite and world number one Novak Djokovic.

But the 6-2, 7-6 (9/7), 6-2 thumping at the hands of Gasquet highlights that the talented 21-year-old still has another level he needs to reach before grand slam glory will come his way.

“Leaves a bit of bad taste in my mouth. I thought I had a good claycourt season leading up, and it was just a bad performance today.”

He was in no mood to discuss what was behind that exchange but admitted his frustrations at having not closed out the tiebreak.

“I had chances in the breaker, and I just didn’t play – I struggled today pretty much in every aspect,” he said.

“I had chances in the second and I just didn’t play big. I just played really bad today. Really bad.”

Gasquet felt the second set tiebreak was pivotal in his victory.

“If I had lost the second set, I think … the outcome could have been very different,” Gasquet said.

“It could have been a five-set match, meaning a very different one.

“I was very adamant on winning the second set.

“We had long rallies. It was a long set. Then I think the fact I won the second set sort of knocked him out.”

Kyrgios needed a medical time-out early in the first set, with a physio arriving to massage his left shoulder.

The injury impacted Kyrgios’ ball toss and backhand, he said.

But he refused to apportion any blame on a shoulder complaint which troubled him in the first set, insisting it was simply Gasquet’s magnificent play which blew him off the court.

“I felt it this morning when I was in my warm-up, and I didn’t think it was anything, but it was bothering me a little bit and I got physio on it,” he said.

“It actually loosened up toward the start of the second set, so it’s hopefully not too bad. It feels okay now.”

Having taken the first set of their third round fixture in style 6-3, Stosur was quickly reminded of Safarova’s quality as the Czech responded with a gritty tiebreaker win in the second.

But instead of fading away, Stosur responded again to set up a seemingly match-winning 4-1 lead in the third.

The nerves would have been kicking in as Safarova dragged the match back to 5-5, claiming the momentum along the way, but Stosur was in no mood to collapse.

She claimed a crucial late break to claim the third 7-5 and set up a fourth round meeting with Simona Halep.