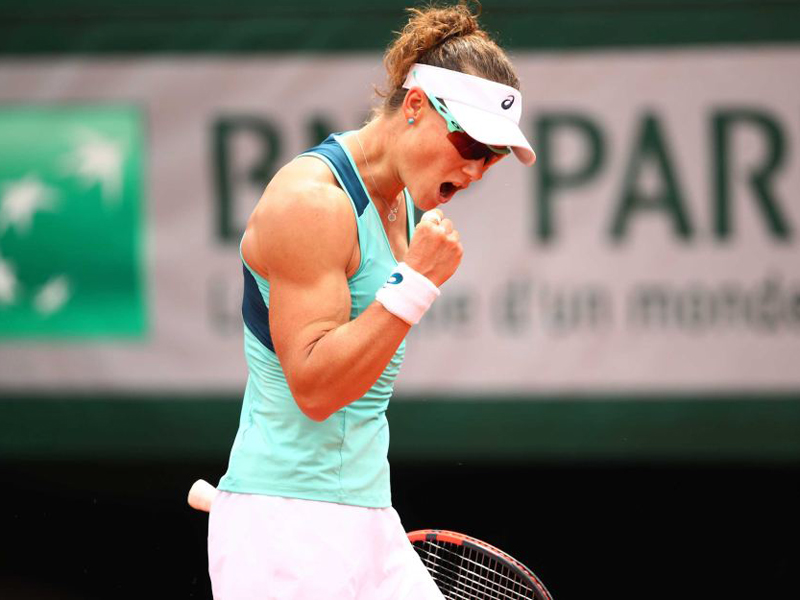 Samantha Stosur is the last Australian standing at the French Open, after leading men’s hope Nick Kyrgios suffered a straight-sets flame-out at the hands of local hero Richard Gasquet.

Stosur produced some of her best tennis in years as she advanced to the fourth round with a superb upset win of last year’s finalist Lucie Safarova.

Bidding to become the first Australian male since Lleyton Hewitt in 2007 to reach the fourth round at Roland Garros, 17th seed Kyrgios complained about a shoulder injury as well as the presence of brother Christos in the players’ box.

Kyrgios required attention from a trainer just three games into the 6-2 7-6 (9-7) 6-2 loss as he struggled with the shoulder complaint.

A clearly frustrated Kyrgios incited a chorus of boos from the partisan French crowd after smashing his racquet against an advertising board next to his seat as he tried to regain his composure before the second set.

There were concerned looks on the faces of his support team, including brother Christos who appeared to be the focal point of Kyrgios’ anger after losing a tense second set tiebreaker.

The exit of his brother from the stands did little to turn around Kyrgios’ fortunes, with Gasquet securing a break in the third game of the third set.

“It was very close right from the first game – Lucie and I typically play matches like this one,” Stosur said.

“For me to get through this one, I’m really, really happy with how I played.”

Stosur will now turn her attention to a fourth-round clash with sixth seed Simona Halep on Sunday.

Nine-times champion Rafael Nadal sent shockwaves around Roland Garros when he unexpectedly pulled out of the Open because of an injury to his left wrist.

A day after notching up his 200th grand slam victory with an imperious 6-3 6-0 6-3 second-round win over Argentina’s Facundo Bagnis, a grim-faced Nadal walked into a hurriedly arranged news conference wearing a navy blue brace around his stricken wrist.

“I have to retire from the tournament because I have a problem in my wrist that I have had a couple of weeks,” said the Spanish left-hander who turns 30 next week.

“Every day was a little bit worse. We tried to do all the treatments possible. Every single day we spent a lot of hours working so hard to try to play,” he added.

“Yesterday I played (after taking) an anaesthetic injection on the wrist.

“I could play, but the thing is yesterday night I start to feel more and more pain, and today in the morning I feel that I could not move much the wrist.”

This is the latest setback to hit the 14-times grand slam champion during an injury-plagued career.

Tendonitis in his knees prevented him from defending his Wimbledon title in 2009 and the 2008 Beijing Olympics gold medallist also missed the 2012 London Games because of injury.

“It’s (the tendon) not torn, but if I keep playing, it’s gonna be torn in the next couple of days. Every day the MRI image is a little bit worse,” said Nadal, the only player to have won the same grand slam title nine times.

“It’s obvious that if it wasn’t Roland Garros I would not have taken the risk of playing the first two days, but it’s the most important event of the year for me so we tried our best.

“To win the tournament I needed to play five more matches, and the doctor said that’s 100 per cent impossible. That (my tendon’s) gonna be 100 per cent torn,” explained Nadal before adding that he first felt the problem during his run to the Madrid semi-finals.

“Today is one of the toughest press conferences of my career. You wait for these two weeks for the whole year, and having to retire today is a very bad news for me.”