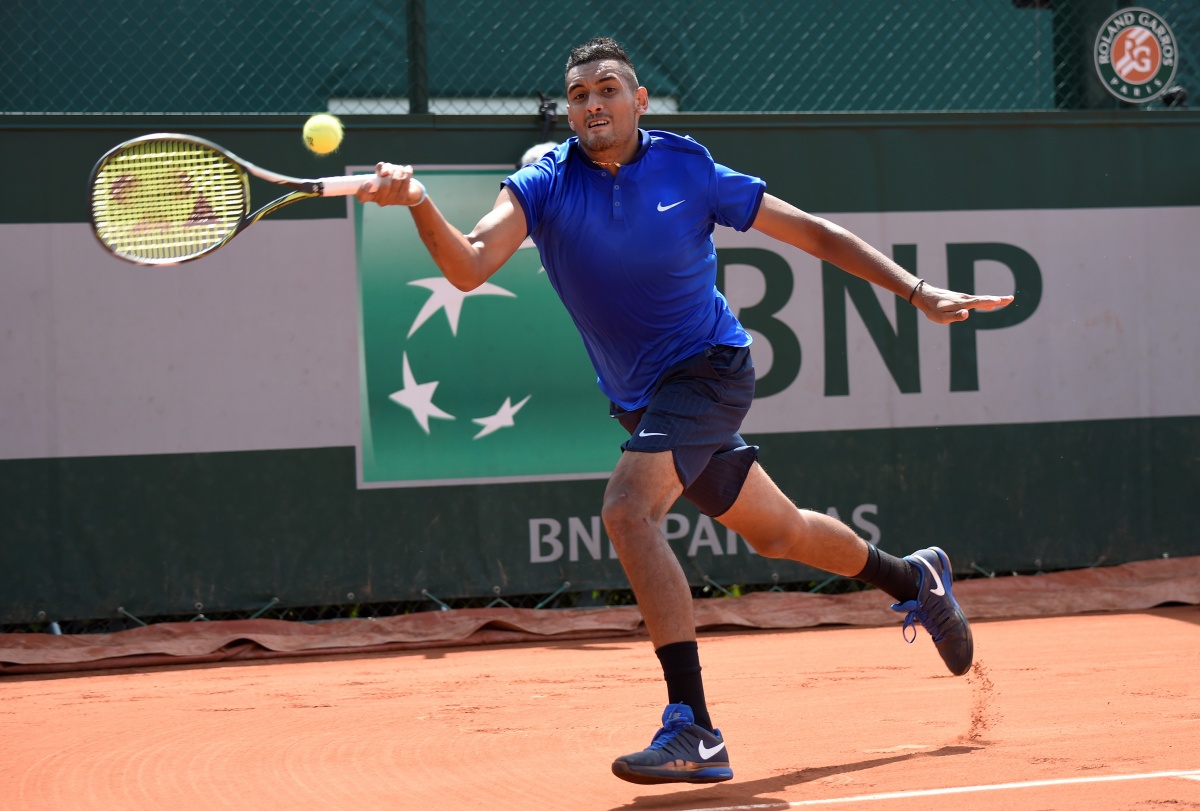 Australia’s top-ranked male and female players have waltzed into the French Open third round on the back of straight sets wins, with Nick Kyrgios and Samantha Stosur making light work of their opponents.

But wildcard Jordan Thompson suffered a heartbreaking exit in his Roland Garros debut.

After courting controversy in his opening win on Sunday, Kyrgios kept his nose clean against a hopelessly outclassed world number 123 Igor Sijsling on Wednesday, winning 6-3, 6-2, 6-1.

• Michelle Payne ruled out of racing indefinitely
• Chris Gayle blasts Chris Rogers, Ian Chappell
• The star of the NBA play-offs is a chubby baby
• Why the hatred of Maria Sharapova is ‘horrible’

Stosur, too, did things with relative ease – breaking her Chinese doubles partner Shuai Zhang five times in a 78-minute 6-3, 6-4 victory.

Stosur will next face 11th seed, and last year’s runner up, Lucie Safarova, on Friday.

“In the moments where I was down, or in the second set down a break, it was almost like the worse the position I was in, the better I played which I guess is a good thing,” Stosur said.

“You don’t want to be in that position in the first place but when you really had to knuckle down and do it, I was able to. That’s what I’m probably most pleased with.”

Kyrgios finished his thrashing with a ripping backhand – one of his 35 winners, compared to 13 unforced errors.

He also won five breaks of serve and closed out the match in 70 minutes – faster even than Rafael Nadal’s 80-minute demolition of Australian Sam Groth on Tuesday.

“You don’t really see too many of those matches go that quick, but I thought he was really aggressive from the get-go,” Kyrgios said.

“Every forehand he had he was trying to really pull the trigger. I didn’t feel he felt comfortable extending the rallies.

“I thought there was going to be a lot more rallies today (but) I served well and I returned well. I just played good tactical tennis.”

The 17th seed will next face French nemesis Richard Gasquet, after he enjoyed a breezy straight sets win over American Bjorn Fratangelo.

He was seeking to become just the second Australian wildcard to reach the French Open third round, following in the footsteps of Thanasi Kokkinakis last year.

But he fell in cruel fashion, as Karlovic sent down a tournament-high 41 aces.

Thompson incredibly saved triple break point in the 15th game of the fifth set to hold serve – where a break would have allowed Karlovic to serve for the match.

It proved to no avail, however, as Karlovic eventually broke him with a deep backhand winner in the 21st set and all Thompson could do was stare at the sky before Karlovic sent down three aces to serve out the match.

Meanwhile, there was Australian carnage among the doubles matches, with John Millman, Bernard Tomic, Sam Groth and the Rodionova sisters, Arina and Anastasia, all suffering defeats.