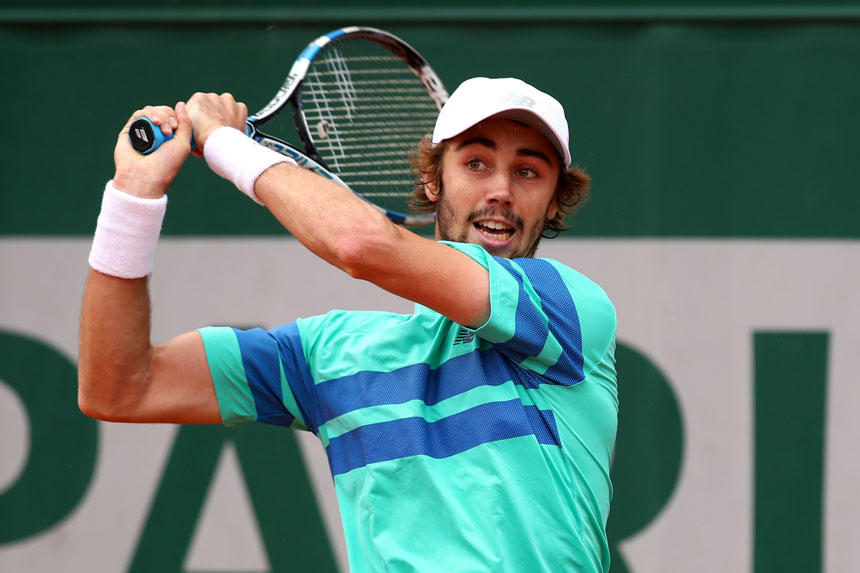 Australian wildcard Jordan Thompson has stormed into the second round of a grand slam for the first time with an impressive straight sets victory at the French Open.

The 22-year-old eliminated Serbian qualifier Laslo Djere 6-3, 6-4, 7-5 in two hours and eight minutes in Paris to join 17th seed Nick Kyrgios, who won comfortably on Sunday, in the second round.

Thompson cracked the top 100 for the first time in March and now enters unchartered territory, having been a first-round loser in his three previous majors – all at the Australian Open.

The victory will lift Thompson’s ranking to a career-high 86th in the world and continues his enormous rise over the past 12 months, during which time he’s moved up from number 254.

“A bit of relief, excitement, all in one – I can’t really describe it,” he said afterwards.

“Unbelievable to win a grand slam match. It’s awesome. I couldn’t ask for much more.

“I was maybe a little bit nervous walking out there (today) but not too bad.

“To be honest, I thought it was going to rain all day so I didn’t really think about playing.”

It was touch and go for a while, though, as Rosol, who famously beat Rafael Nadal in the Wimbledon second round in 2012, threatened another huge upset on a damp and dreary day that began two hours late because of heavy rain.

“A really tough match, the conditions were slow and heavy,” Wawrinka, relieved to avoid becoming the only defending French Open men’s champion in the professional era to lose in the first round, told reporters.

“He kept me under pressure permanently. I kept running after the score. You can’t really relax.”

It was that kind of day, one for grit over style and Spain’s fourth seed Garbine Muguruza, a Wimbledon finalist last year, showed plenty as she too avoided an early exit.

Wearing a long-sleeved top like most of the women players, the flat-hitting Spaniard took a while to find her game but eventually ground past Anna Karoline Schmiedlova 3-6, 6-3, 6-3.

Russian Svetlana Kuznetsova, a champion 10 years ago, also toiled away to beat Yaroslava Shvedova as the seeds, apart from a few exceptions such as seventh seed Roberta Vinci, flourished.

Some advanced to the second round with a flourish, namely second seed Agnieszka Radwanska of Poland and Romania’s Simona Halep, the sixth seed.

Halep, beaten by the currently suspended Maria Sharapova in the 2014 final, beat Japan’s Nao Hibino 6-2, 6-0 while Radwanska, looking to go beyond the quarter-final for the first time, despatched Serbian Bojana Jovanovski 6-0, 6-2.

World number two Andy Murray launched himself into recovery mode against veteran Radek Stepanek before play was suspended due to darkness with the Czech leading by two sets to one.

Murray, who stunned Novak Djokovic to win the Rome Masters last weekend to boost his title hopes, struggled mightily against 37-year-old Stepanek early on before fighting back to 3-6, 3-6, 6-0, 4-2 with play to resume later on Tuesday (AEST).

Otherwise it was a shock-free day in the men’s draw with a batch of seeds moving through, led by number five Kei Nishikori.

The Japanese, a semi-finalist in Madrid and Rome in the build-up to Roland Garros, followed Wawrinka on to Chatrier with his job already half done against Simone Bolelli.

He was joined in the second round by eighth seed Milos Raonic and 16th seed Gilles Simon who delighted the hardy home fans by beating Brazil’s Rogerio Dutra Silva 7-6 (7/5), 6-4, 6-2.