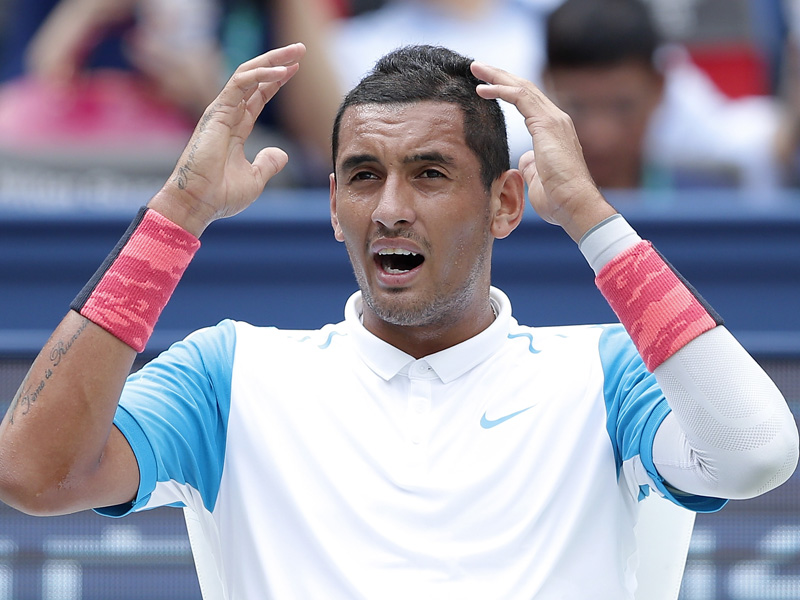 We know that. He’s come out and told us all. He’s also said he’d rather play basketball.

Kyrgios revealed the stunning extent of his fanaticism for the sport on Tuesday in a column published by The Players Tribune, a website full of first-person stories from athletes.

The piece, titled ‘Why I Bleed Green’, is a fascinating account of Kyrgios’ love for the NBA’s Boston Celtics, which was triggered by video games.

The main take-away from Kyrgios’ writing was the fact that he regularly misses out on sleep to watch the Celtics when on tour.

The 21-year-old, who said he played basketball for an Australian ‘junior league team’, recited a particularly memorable Boston win which he stayed up until 4am for – at the same time he was competing at Portugal’s Estoril Open in April.

Kyrgios made the semi-finals of that tournament, losing to Nicolas Almagro.

“It was midnight. All the lights were off. I had my headphones on. I was staring at my phone, completely locked in,” Kyrgios wrote.

“My biggest challenge was trying not to scream, which would have woken up the poor people in the next room. Sleep was not an option.

“When you’re a basketball fan living abroad, sleep is a real challenge, especially during the playoffs. You’re looking at a midnight tip-off for East Coast games in Europe.”

He wrote that he stayed up that night until 4am.

“When the Hawks went on their 14–0 run in the third quarter, it was 2 a.m. I was thinking, ‘Alright, maybe you better just go to sleep. This is miserable’.

“Then Isaiah Thomas went off and got the Celts back into it … the Celts fought back to force overtime, and I was pacing around the room like a madman.

“I think O.T. [overtime] started at like 3am … when Isaiah hit the crazy off-balance three from the corner, that was it.

“I went mental. The Garden [Boston’s home court is the TD Garden] was going crazy, and I was jumping around my hotel room in the dark, celebrating by myself.

“When the game was over, I stayed up looking at stats and recaps for another hour. I was jacked. I think I ended up falling asleep at like 4am.

“This is my life on tour as a Celtics fan.”

Kyrgios also described ex-Boston star Kevin Garnett as “my spirit animal” and said that “everything in my brain always goes back to basketball”.

Garnett, 39, is a 15-time All-Star who played for the Celtics from 2007-13. He currently plays for the Minnesota Timberwolves.

Kyrgios also shed further light on why he loves the sport so much.

“People on tour will see me streaming games on my phone in the weirdest places and they’ll ask me why I’m so into basketball,” he wrote.

“I think it has something to do with tennis being such an isolated sport. You’re one-on-one out there.

“What I love about playing hoops is the team aspect … it’s a different kind of sport. I just love it.”

This might be the reason Kyrgios has a short fuse