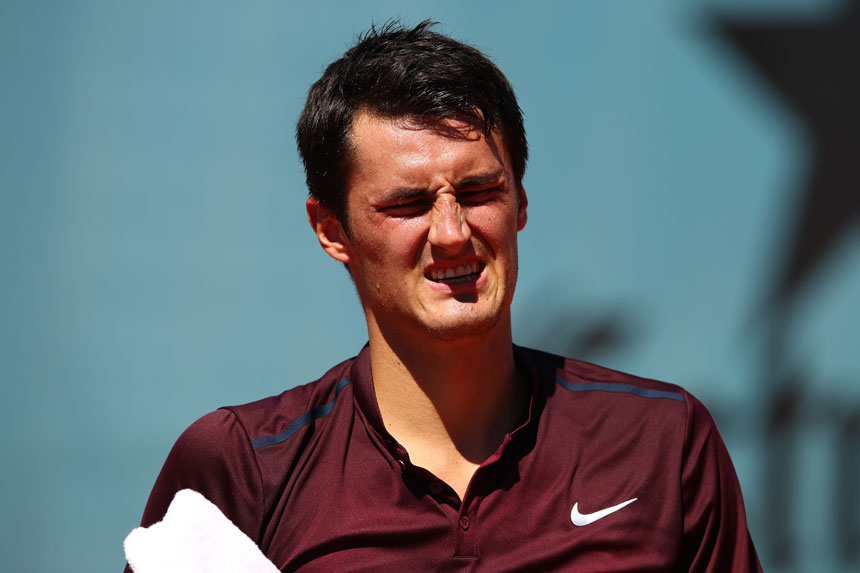 Bernard Tomic’s attitude is again the talk of the tennis world after his attempt to return serve in a straight-sets defeat to Fabio Fognini in Madrid.

The Italian beat Tomic 6-2 6-4 on clay in the Spanish capital, but it was Tomic’s effort on the last point of the match that sparked criticism.

• Why Leicester City’s success is no fairytale story
• ‘A stain on our game’: Parramatta hit by salary cap
• Frustrated Lewis Hamilton rants about everything

Fognini led 5-4 and 40-0 in the second set when the Aussie, holding his racquet by the strings and not the handle, watched a serve sail harmlessly past him for an ace, ending the match. The loss continued Tomic’s poor form.

He quickly responded to critics, telling the Gold Coast Bulletin: “I don’t care about that match point.

Watch the incident below

The world number 22 has lost in the first round at all of his past three events to players ranked lower than him.

While Fognini, at number 31, is no slouch, Robin Haase (64) and Diego Schwartzman (87) are ranked significantly lower.

Chase wrote for Fox Sports: “Twas a time when you could blame the childish, oft-hilarious, antics on the foolishness and stupidity of youth.

“Tomic is now 23-years-old though, which makes it just stupid.”

This isn’t the first time Tomic has been accused of throwing a match.

In 2012, at the US Open, tennis legend John McEnroe labelled his effort as a “tank job” in a straight-sets loss to American Andy Roddick.

“Tomic is teeing it up … this is a shame. You don’t like to see this,” McEnroe said on US television.

Tomic later said that he had been overawed by playing on centre court at Flushing Meadows, in front of a crowd of more than 22,000 fans.

Then, in 2014, he lost 6-0 6-1 to Finn Jarkko Nieminen in just 28 minutes. It remains the shortest completed match played on the ATP tour.

His decision to withdraw from a quarter-final in Sydney in January was also criticised.

A bank-up of matches saw Tomic face two in one day – but he withdrew early in his first after telling the court umpire he had a ‘good draw’ at the upcoming Australian Open.

How tanking can be used as a ‘weapon’

“I sort of zone out for a few games, try to use it to my advantage to come back in.

Tomic also said then that his effort could not be judged externally.

“Effort is only between you and you,” he added.

The Rome Open will be held next week.

Following that, most players normally take a break before the French Open begins on May 22 at Roland Garros.

‘Would you care if you were worth over 10m?’