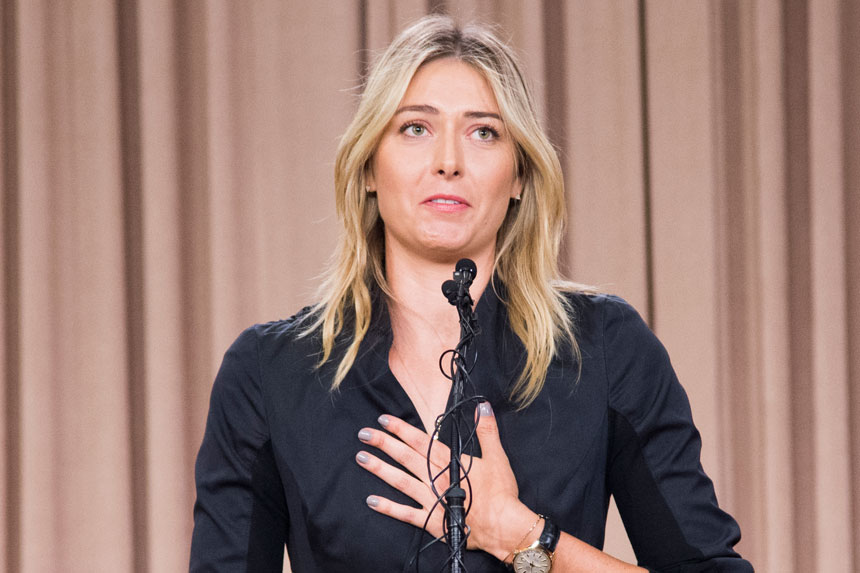 Sharapova was emotional at her Los Angeles press conference. Getty.

Russian tennis champ Maria Sharapova has shocked the sporting world by announcing she failed a drug test at the Australian Open in January.

The former world number one told a media gathering in Los Angeles she had been taking anti-ischemic drug Mildronate, also known as meldonium, which had only recently been listed by WADA as a banned substance.

Sharapova said she would take full responsibility for the oversight, saying she did not want to end her tennis career this way.

What kind of ban can Sharapova expect?

Sharapova has been charged by the ITF under Article 8.1.1 of the Tennis Anti-Doping Program (TADP) and has been provisionally suspended from tennis with effect from March 12.

But what precedents are there for Sharapova’s case? Viktor Troicki and Marin Cilic are the most recent examples in the men’s game, with Troicki banned for 18 months for failing to provide a blood sample in April 2013.

Troicki had his ban reduced to a year on appeal by the Court of Arbitration for Sport (CAS).

Cilic, who won the US Open in late 2014, tested positive for nikethamide – a banned substance – in April 2013. He was banned for nine months, which was reduced to four months on appeal.

It is not yet clear what kind of ban Sharapova faces, though several media outlets have speculated anything between 12 months to several years.

What else does Sharapova stand to lose?

The prizemoney Sharapova earned at the Australian Open – about $400,000 for reaching the quarter-finals – will be the first to be hit. She will be forced to forfeit that cash as well as ranking points as a result of the suspension.

Sharapova may have been outshone by the likes of Serena Williams on the court, but off it, the Russian has been a runaway success, ranked by Forbes as the world’s 26th-highest paid athlete of 2015, and the highest-paid female athlete for the 11th-straight year.

Fashion endorsements, a fierce business acumen and a strong personality have all combined to make Sharapova a force to be reckoned with in the business world.

Her tennis success, charity work and her ambassadorial role with the United Nations Development Program has seen her profile skyrocket over the course of her career.

She recently released a high-profile line of confectionery called ‘Sugarpova’, much to the chagrin of healthy-eating advocates, even discussing the possibility of entering the US Open under the pseudonym Sugarpova as part of a marketing campaign.

The drugs suspension, however, could seriously tarnish her image, especially concerning her fashion endorsements, which according to Forbes may be reconsidering any plans for spring launches.

She boasts Avon, Evian, Tag Heuer, Nike, Porsche and Cole Haan among her portfolio of endorsements.

Can Sharapova recover towards the end of an injury-hit career?

Should the ban be 12 months or less, could Sharapova return for one final surge to cap off her career?

She is 28 years old and has battled a long history of injuries – perhaps making her career Grand Slam all the more impressive.

But having seen and done it all in tennis, Sharapova has fallen behind her biggest rival Serena Williams, whom she has not beaten since 2005.

Would she stay sharp after a year out from the game and have any hope of keeping up with not just Williams, but a host of promising new blood in the women’s game?

Sharapova insists she does not want this to be the end to her career, though those hopes will be pinned on the ITF handing down a ban similar to those meted out to Troicki and Cilic.

“I have been very open and honest about many things, I take great responsibility in my job … I made a huge mistake,” she said in Los Angeles.

“I let my fans down, I let the sport down that I’ve been playing since the age of four, that I have loved so deeply.

“I know with this I face consequences and I don’t want to end my career this way, and I really hope I get another chance to play this game.”