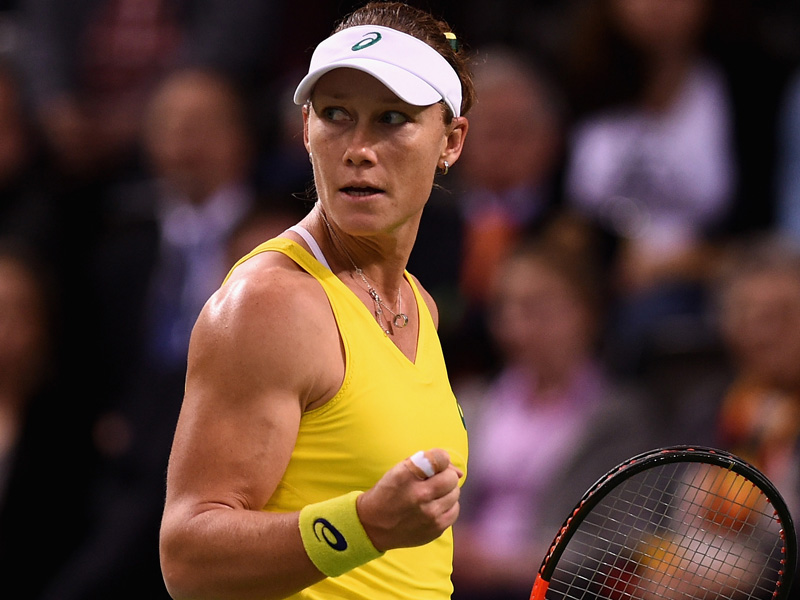 The veteran doubles pairing of Stosur and world No.3 doubles player Casey Dellacqua fought back from a set down in Bratislava on Sunday to defeat Jana Cepelova and Daniela Hantuchova 5-7 6-1 6-2 and claim the tie 3-2.

Stosur, who had kept Australia in the tie with victories in both of her singles matches, came up big in the fifth and deciding rubber — holding serve in the crucial third set.

With both countries trading breaks of serve, Stosur produced a big hold to give the visitors the edge — either side of breaking both Cepelova and Hantuchova’s serve to take a 5-2 lead.

Dellacqua calmly served out the match to book Australia a place in the World Group playoffs in April, with their opponent to be decided next week.

Stosur had earlier ensured Australia started the day with the momentum, overcoming a rocky start to secure a straight sets victory over world No.29 Anna Karolina Schmiedlova and give the visitors a 2-1 lead, which was short lived as 17-year-old Kimberly Birrell was swept aside by former Australian Open finalist Dominika Cibulkova in straight sets, 6-3 6-1 in 75 minutes.

Stosur had recovered from being 5-1 down in the opening set to take the rubber 7-6 (7-5) 7-5, giving her a clean sweep in the singles matches.

The 31-year-old Stosur called on her fighting qualities to recover from an early double-break in the first set to force a tiebreak, which she won before again falling behind in the second set.

However, despite making an alarming 51 unforced errors in the match, it was Stosur’s strong serving and powerful groundstrokes, which delivered 26 winners and caused Schmiedlova 23 forced errors, that paid off in the end.

Birrell, making her Fed Cup debut in a live rubber, started admirably and looked promising in the first set before being broken for the first time in the eighth game.

Cibulkova, a former world No.10 who last month beat Birrell in Hobart Open, sensed her opportunity and pounced.

The 26-year-old peeled off eight straight games to leave Birrell shellshocked, until the youngster earned a break back late in the second set to avoid being bageled.