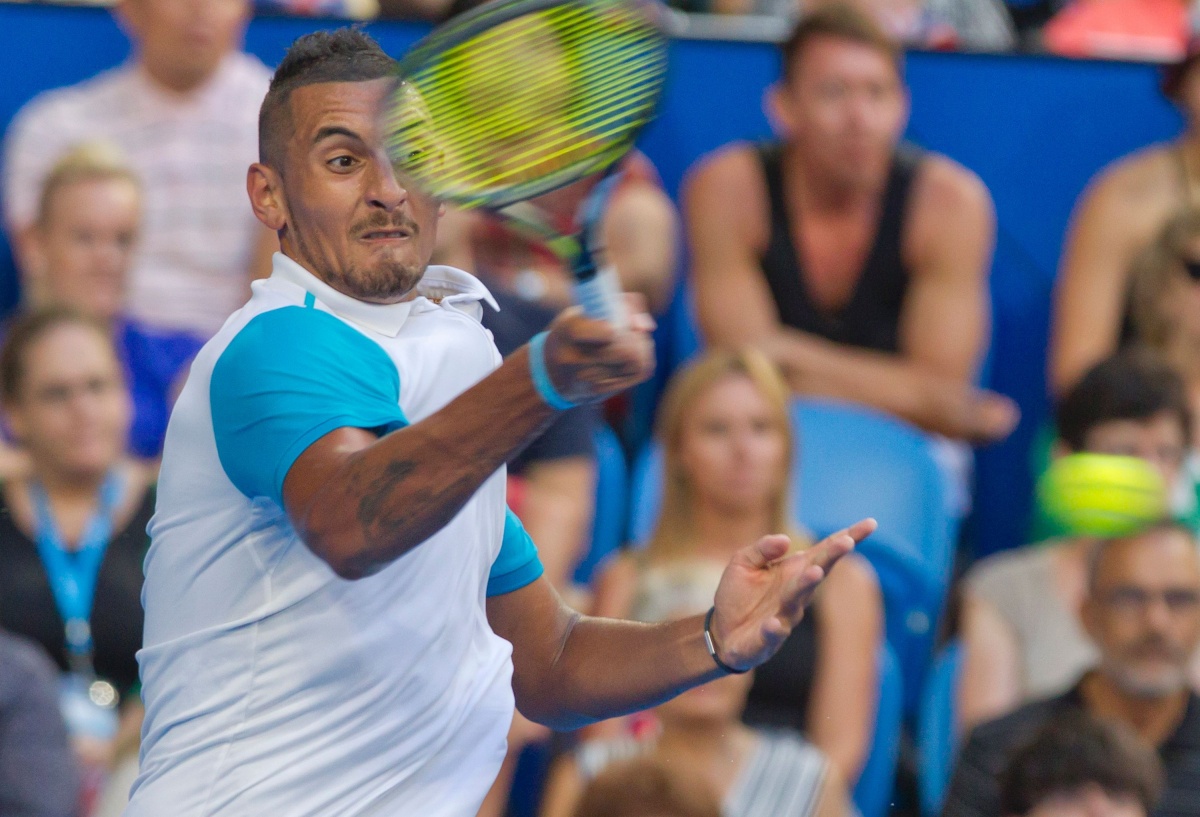 A composed yet fiery Nick Kyrgios has given his Australian Open hopes a boost and gained a slice of revenge over grand slam nemesis Andy Murray with a 6-4 7-6 (7-5) shock upset in the Hopman Cup on Wednesday night.

Murray battled a mystery right leg injury for most of the match, and Kyrgios took full advantage to achieve his breakthrough win against the world No.2 and former Wimbledon champion.

• Why Nick Kyrgios is wary of Lleyton Hewitt
• Chris Gayle’s playboy past comes back to haunt him
• Aussie Ben the best since LeBron: Magic Johnson

Murray entered the match holding a 4-0 win-loss record over Kyrgios.

Three of those wins came in grand slams in 2015, including their quarterfinal showdown at the Australian Open.

Kyrgios, who is infamous for his on-court antics, kept his cool for most of the contest, despite the majority of the West Australian crowd cheering for hit Scottish opponent.

The one lapse in his composure came during a quick exchange of words with a member of the Perth crowd while scores were locked up at 4-4 in the second set.

“Do you want to come down here and play?” a clearly frustrated Kyrgios asked the spectator.

.@NickKyrgios gives it back to the #HopmanCup crowd! Doesn’t seem like they took him up on his offer to play… https://t.co/augOFKSxed

The Aussie young gun lost that game, but saved a break point shortly after and went on to win the match in a tiebreak.

He said his victory over Murray would give him a huge dose of confidence heading into the Australian Open.

“It doesn’t matter what type of match you’re playing, you always want to win,” he said.

“One hundred per cent he wanted to win that tonight. I thought it was a good match.”

The undoubtedly talented, but often controversial Australian youngster, who is ranked 30th in the world, can now add Murray’s name to the list of grand slam champions he has defeated in his short career.

His latest victory marks a promising start to 2016, after a 2015 marred by controversy.

Kyrgios was suspended by the Association of Tennis Professionals (ATP) for his crass sledging of former Australian Open champion Stanislas Wawrinka, who he told mid-match that fellow Australian tennis player Thanasi Kokkinakis had “banged your girlfriend mate, sorry to tell you”.

His lacklustre performance in a tough match against Frenchman Richard Gasquet also attracted criticism, as did his numerous confrontations with umpires and linespeople.

During a match with Murray at the US Open last year he pretended to be asleep during a change of ends.

Wednesday night’s performance reminded people not of the controversial bad boy of 2015, but of the 20-year-old’s incredible promise as a player.

In the weeks leading up to the match, Kyrgios told Fox Sport he would always compete with passion.

“I’ve always been an emotional guy,” he said.

“I wear my heart on my sleeve and every time I go out there I just want to win.

“And that’s going to be my main objective throughout my whole career.”

The Australian Open begins on January 18.