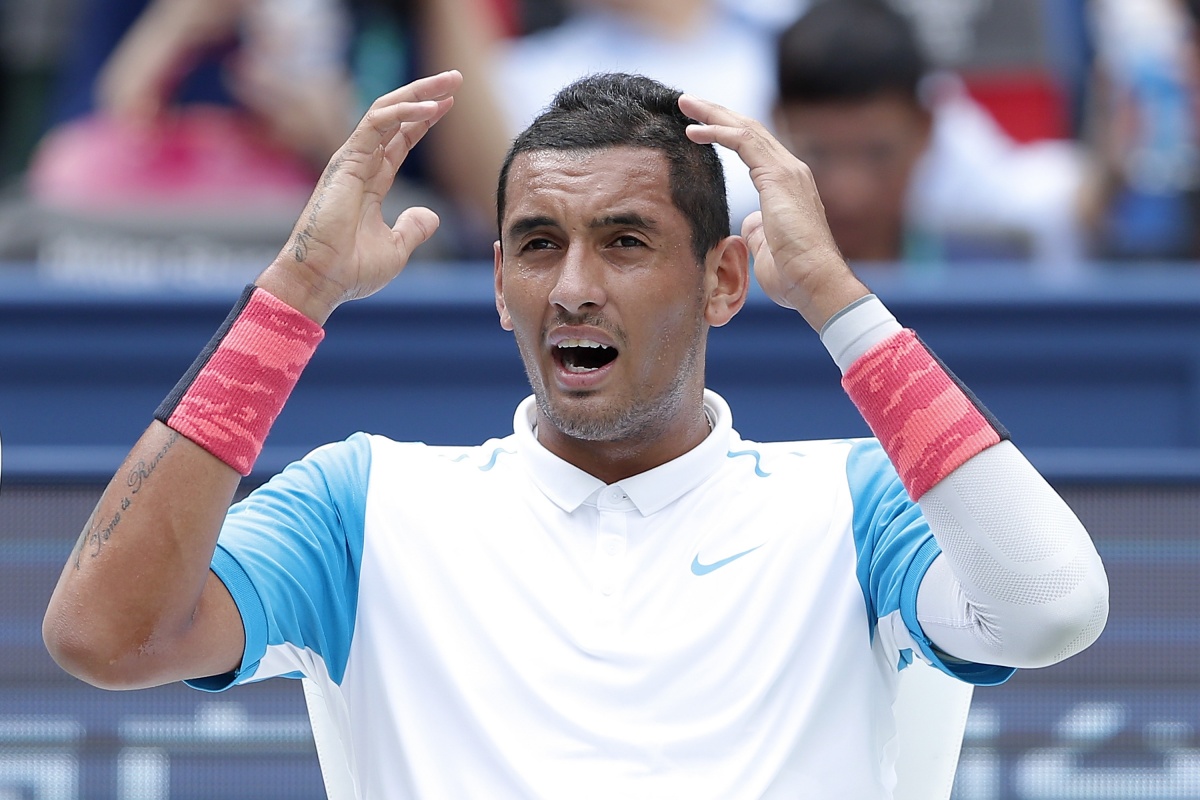 Nick Kyrgios has narrowly avoided a four-week ban from the ATP Tour after an outburst during an explosive second-round exit from the Shanghai Masters.

Effectively on six months’ probation, Kyrgios was issued with an unsportsmanlike conduct warning during his 1-6, 6-4, 6-4 loss to Japanese sixth seed Kei Nishikori.

Chair umpire Mohamed Lahyani sanctioned Kyrgios after he fired a scorching practice shot down the middle of the court and nearly struck a linesman.

On Thursday, officials opted not to penalise the Australian hot-head for the conduct, which carried a maximum fine of $US10,000 ($A13,770).

Kyrgios is serving a six-month suspended sentence for his unsavoury sledging of French Open champion Stan Wawrinka at the Montreal Masters in August.

If he racks up fines totalling $US5000 or more before February, the 20-year-old will be banned from the ATP Tour for 28 days.

The two-time grand slam quarter-finalist was slapped with a $US1500 ($A2065) fine on Tuesday for a foul-mouthed outburst during his first-round win over Andreas Haider-Maurer.

Perhaps realising the seriousness of the situation on Wednesday, a rattled Kyrgios dropped serve to love after his warning to allow Nishikori back on level terms in the match before confronting Lahyani.

“How can you give me a conduct warning for that? I didn’t hit anyone. It was about this far (an arm’s length) away,” Kyrgios pleaded before demanding the tournament supervisor come to centre court to intervene.

Lahyani countered: “But he had to jump out of the way. For me, it’s dangerous. It’s risky”.

Kyrgios’s warning came the very point after Lahyani cautioned Kyrgios on the run for bellowing “f…ing ridiculous” after watching a Nishikori crosscourt winner sizzle past him.

“Please, please, I’m giving you the benefit of the doubt because it was a good shot,” Lahyani said, urging Kyrgios to stop swearing.

Earlier in the match, the Swedish umpire was accused of coaching Kyrgios during a changeover when the Australian vented his frustrations at a linesperson making a wrong call against him.

Lahyani said the call was too tight to over-rule before advising Kyrgios to focus on the match after he’d dominated the opening set.

Commentators on ESPN television couldn’t believe what they were hearing.

“What I don’t agree with is Mo there saying to Nick: ‘Don’t let that one bad call ruin your concentration. Let’s get back into the match,'” said one commentator, Jason Goodall.

“That’s coaching, bordering on coaching … that’s not the umpire’s job.”

Tomic’s victory is a big blow to Ferrer’s hopes of qualifying for the eight-man season-ending championships but pushed the 22-year-old to within a win of his ninth quarter-final of the year.

“Playing a very difficult player. It’s not easy when you step on court with him.

“I thought I did a very good job of what I needed to do today.”

Enjoying a career-high ranking of No.20 in the world, Tomic next plays either 11th-seeded Frenchman Richard Gasquet or Canadian Vasek Pospisil for a place in the last eight.

Kyrgios in strife again as he bows out in Shanghai