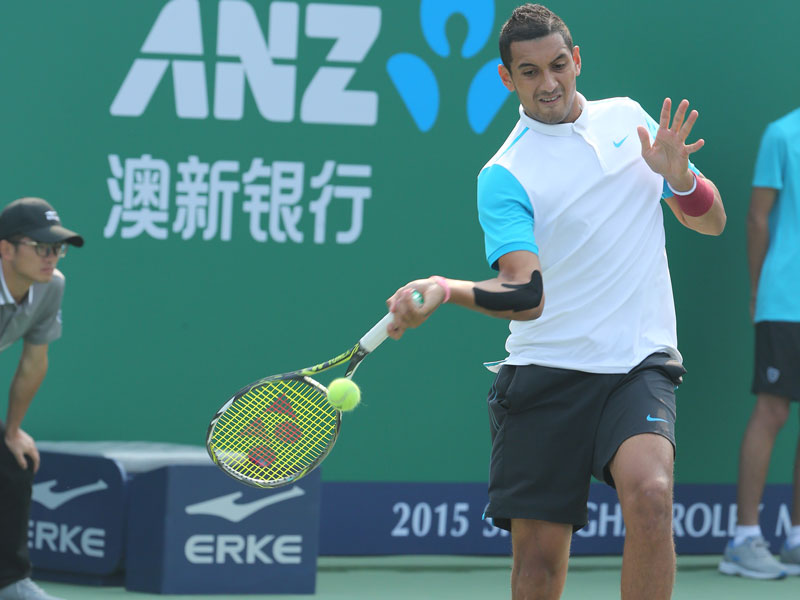 Australian tennis hothead Nick Kyrgios has continued to play with fire, as a suspended one-month ATP Tour ban hangs over him.

The world No. 32 was in China for the Shanghai Masters on Monday and posted a 6-3 6-2 win over Austrian Andreas Haider-Maurer.

But during the big win, the 20-year-old was issued with his second code violation in the past week, penalised for his profane review of the “f***ing [court] surface” amid a running commentary of the “unbelievable” match.

Kyrgios also took issue with sloppy work from the ball-kids, audible commentary and a cameraman who repeatedly spoke during points – and who was eventually rejected after multiple warnings.

He later described it as a “strange” match.

Kyrgios hit the headlines in August after crude comments he made during a match in Montreal about Swiss player Stanislas Wawrinka’s reported girlfriend, Donna Vekic.

Further punishments – both suspended – included a 28-day ATP Tour ban and a $US25,000 fine ($A33,875) and will come into effect if he breaches behavioural standards on court in the next six months.

As well as the Shanghai violation, the 20-year-old was penalised for hitting a ball into the ceiling in the quarter-final of the Japan Open last week.

Another transgression before February 24 next year may see the ban imposed, as would the accrual of fines of more than $5000 at ATP tournaments.

Kyrgios will play world No.6 Kei Nishikori of Japan in the next round of the Shanghai Masters.