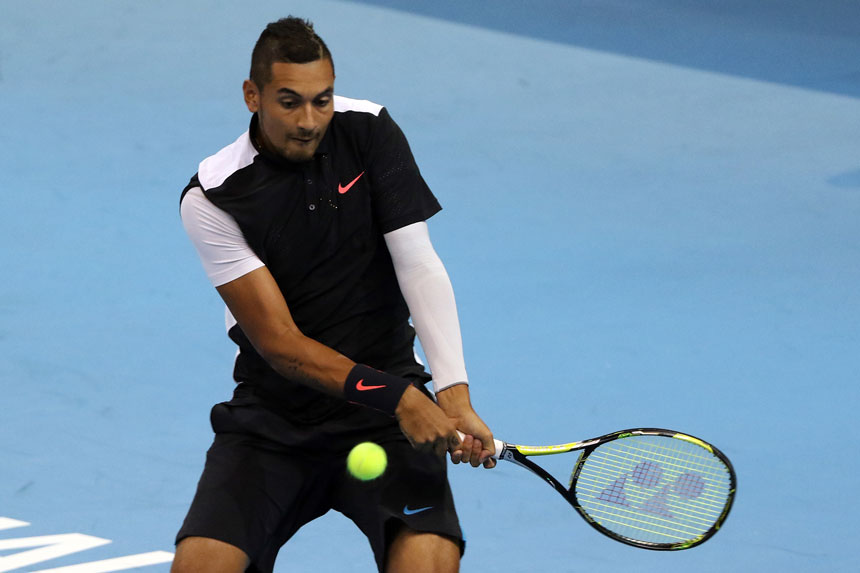 Nick Kyrgios has blasted his way into the quarter-finals of the Malaysian Open with an emphatic victory over Tatsuma Ito of Japan.

The seventh-seeded Australian chalked up a 6-3 6-2 win in under an hour to set up a difficult encounter with huge-serving Croatian Ivo Karlovic.

Karlovic thundered down 18 aces in his second-round clash to beat Georgia’s Nikoloz Basilashvili 7-5 4-6 6-3.

• Bernard Tomic takes over as Australia’s No.1
• Masur says Davis Cup captaincy is up in the air
• Hewitt insists Nick Kyrgios is ‘a shining light’

Kyrgios admitted he faces a tough test against Karlovic but said he’s satisfied with how he’s playing.

“I came out strongly and I was comfortable throughout the game,” Kyrgios said.

“I know I will get chances and I have to take them.”

Veteran German Benjamin Becker persevered through early struggles to outlast his sixth-seeded French rival Jeremy Chardy 5-7 6-1 7-5, which sees the 34-year-old advance into his first ATP quarter-final of the season.

Chardy’s strong record on the hard-court had made the French player an early favourite in the tournament.

However, Becker fought hard to claim his 10th tour-level win of the season as he prevailed in two hours and six minutes, after withstanding 13 aces and breaking his French opponent four times.

After losing the first, the German dominated in the second set with his precise forehand returns to level proceedings, before clinching the match in the third.

“I’ve lost in a few close matches before, so it was good to get the win and it helps my game and confidence,” Beck, who is bidding for his first ATP title since 2009.

Defending champion Joao Sousa of Portugal scored a commanding 6-2 6-2 victory over Poland’s Michal Przysiezny to advance into the quarters.